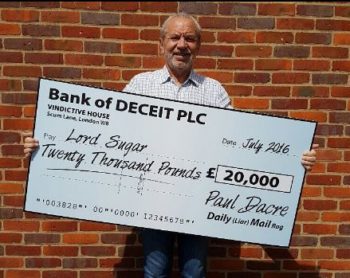 The UK Daily Mail called the host of the British version of The Apprentice a “spiv,” which means, according to Merriam Webster dictionary, “a man who makes money dishonestly.” Now, the Mail is paying the TV host, Lord Sugar, £20,000.

“An article published on May 26 described Lord Sugar as a ‘spiv’. This word may be understood to describe a person who is dishonest in his business dealings. We are happy to confirm that this was not the intended meaning, as indeed the article stated he is honest and hard working.”

iMediaEthics has written to Green’s representatives to see if he also complained. Green is the chair of Arcadia Group.

Sugar posted a photo of him with a mocked up large-size check, which the Guardian noted was fake.

Scum @DailyMailUK called me a spiv. My lawyer made them pay £20k and make a retraction. I'll donate the £20k to GOSH pic.twitter.com/pm7ZnaYq8E

iMediaEthics has written to Sugar’s representatives and the Mail for comment.