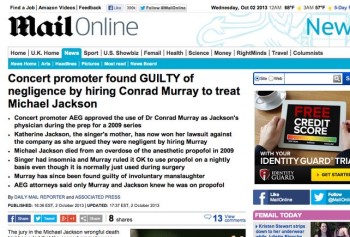 A screenshot of the bogus article, via Lindsey Mastis.

In reality, AEG, the concert promoter, was found not guilty yesterday. As CNN reported, AEG had hired Dr. Conrad Murray to treat Michael Jackson. While Murray was found guilty in Jackson’s 2009 death, “the jury decided that Murray was competent, so even though AEG Live hired him, it was not liable for Jackson’s death,” CNN wrote.

It’s fixed now, but the Daily Mail in the UK messed up on the Michael Jackson verdict. PIC pic.twitter.com/KyYWg4aG4O

The Hufington Post also has a screenshot of the article.

The Daily Mail article, which has since been unpublished and now goes to an error page, is still visible in Google search results.

The Daily Mail now has published a correct version of the story saying that AEG was found not guilty.

iMediaEthics has written to the Daily Mail asking if it has published or will publish a correction and what went wrong. We’ll update with any response.

In 2011, the Daily Mail made a similar mistake in publishing a story saying that Amanda Knox lost her appeal of her 2009 conviction of murdering Meredith Kercher.  Knox had actually won her appeal and was freed, as iMediaEthics wrote at the time.

The Mail apologized for the error, which it said was the result of posting the wrong version of two prepared stories about the case.  But, questions still remained because the Mail story with the wrong verdict included comments from the prosecutors about the guilty verdict, even though that event never happened. The Mail claimed the “quotes were obtained from various parties in the event of either a guilty or not guilty verdict.”