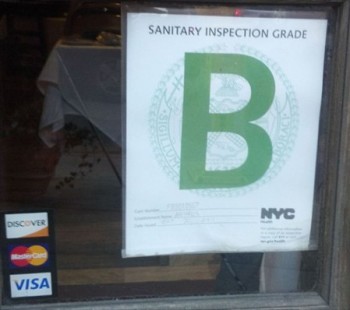 O.K. No teasing. Just the facts. The answer is: Yes! Kind of. Somewhere around nine out of ten New Yorkers actually (probably) agree on something.

What could that be, you say? According to a poll cited by the city’s health department, 90% of New Yorkers approve of the department’s actions in “posting letter grades to provide customers with information about a restaurant’s inspection.”

If you are dubious that such an overwhelming consensus could possibly exist outside of North Korea, I want to admit up front that when I first saw the notice citing 90% approval, I, too, was convinced something was tricky. The poll had to be wrong. Never had so many agreed about so much done by so few bureaucrats…

So, I checked it out. I contacted Micheline Blum at the Baruch College School of Public Affairs. She has a long record of excellent research to her credit, and is the Distinguished Lecturer and Director of the college’s Survey Research organization, responsible for conducting the survey. Her statistician is Martin Frankel, another polling veteran with an impeccable reputation. The survey itself was sponsored by the Centers for Disease Control and Prevention.

With such credentials, I was confident the poll would also meet the highest professional standards. And … it does…with a minor quibble.

Blum sent me an extended methodology, which reported that the survey included both landline and cell phone numbers, interviews were conducted in both English and Spanish, and all five New York City boroughs were sampled. Excellent.

Also, the question that probed respondents’ views about the city’s restaurant rating system was neutral (unlike, say, the Quinnipiac Poll’s tendentious question about the expansion of bicycle lanes in the city):

Do you approve or disapprove of the health department posting letter grades to provide customers with information about a restaurant’s inspection?

My quibble (and given the nature of this issue, it is a minor one): there is no explicit “don’t know” option. So, respondents who have never heard about the restaurant rating system learn about it in the survey. And what do they learn? That the health department is trying to help restaurant customers by rating the restaurants. That is soo nice! Who could possibly disapprove? (Well, 6 percent did.  Perhaps they’re the restaurateurs who received bad grades and are forced to display them in the windows — definitely not good for business! — or maybe they’re just libertarians who cringe at the mere mention of government.)

The positive information in the question helps to explain the otherwise Alice-in-Wonderland type results, showing only 70% of New Yorkers aware of the ratings, but 90% approving of them! (That extra 20% or so liked what they heard on the phone, even if they hadn’t seen the ratings personally.)

It’s important in this context to remember that poll respondents’ approval is for the concept of rating restaurants, not the rating system itself. People can’t possibly know if the rating system is fair or rigorous or (shudder to think) just fluff.

In that sense it’s a bit misleading to say, as the Department of Health does, that “New Yorkers Strongly Support Restaurant Grading.” There is widespread acceptance of grading, because it sounds like a good idea, and because the vast majority of people probably assume the government will do an adequate job. But acceptance is not the same as “strong” support (you know, with passion and commitment!). Any negative information about the system could easily change minds.

In retrospect, the 90% consensus is not so surprising after all. A gimme, really. Yes, it’s exaggerated a bit by a forced choice question, which doesn’t allow people to admit they are clueless. But, seriously, do we actually need a poll to tell us that (almost) everyone would like to be warned ahead of time if the food they’re thinking about eating will tear their insides out? Even if it’s the government doing the warning?

David W. Moore is a Senior Fellow with the Carsey Institute at the University of New Hampshire. He is a former Vice President of the Gallup Organization and was a senior editor with the Gallup Poll for thirteen years. He is author of The Opinion Makers: An Insider Exposes the Truth Behind the Polls (Beacon, 2008; trade paperback edition, 2009). Publishers’ Weekly refers to it as a “succinct and damning critique…Keen and witty throughout