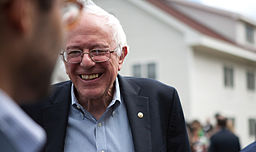 According to the latest CBS/YouGov polls, if the party elections in the Iowa Caucuses and the New Hampshire Primary were held today, Donald Trump and Bernie Sanders would win both contests for their respective parties.

History shows that since the reformed nomination process came into existence in 1972, no candidate who has won both of these early contests has failed to win his party’s nomination.

Yet, hardly anyone, with the probable exceptions of those candidates themselves and their most fervent followers, believes either Trump or Sanders will actually be their party’s nominee.

The main reason for this widespread skepticism is that the respective party leaders really, really don’t want these men to win, no matter what the polls might show.

In Trump’s case, GOP leaders are actively trying to derail his candidacy, fearing that the longer he stays in the race – God forbid should he actually win the nomination! – the more toxic his effect will be on the Republican Party’s chances of winning the general election 14 months hence.

In Sanders’ case, party leaders are not actively trying to stop his candidacy, but no Democrat in either the U.S. House or U.S. Senate has endorsed him, virtually everyone there fearing that as an avowed socialist and 74-year-old man from Vermont, he simply can’t win in a general election.

The current polls dispute these fears, with both Trump and Sanders faring at least as well as their respective competitors in the hypothetical general election match-ups, and in some cases faring better.

So, who to believe – the polls or the party leaders?

Or is this a case where the party “bosses” are out of step with the rank and file party members?

Who Chooses a Party’s Nominee? The Effect of the 1972 Reforms

Prior to 1972, it was clear that party leaders exerted substantial control over their party’s nomination process.

For the most part, the national conventions of the two parties, held in the weeks leading up to Labor Day, produced the nominees. Delegates to the convention were chosen mostly by state party leaders, so the delegates voted pretty much the way the party leaders wanted. A lot of bargaining would occur among the various state leaders across the country, with the ultimate goal of producing a candidate who could win in November.

But in 1972, the two parties gave up control of the nomination process. After the 1968 election, when Democrat Hubert Humphrey was able to win his party’s nomination without entering a single primary or caucus contest, party leaders established a commission to democratize the process, giving the party’s voters the final say in which delegates would go to the convention. The reforms led to some unintended consequences, however, which proved less than desirable.

The new rules made it impossible for state party leaders to arbitrarily select delegates to the national party nominating convention. Instead, candidates would earn delegates by competing in the states’ caucuses and primaries, and the number of delegates a candidate earned would be roughly proportional to his standing in the election results.

While there had been some states that held primary elections before the reforms, most states did not, and even in the states with primaries, the delegates were not always bound to the candidates who won. At the convention, the delegates might well switch their allegiance to support candidates preferred by their party leaders.

While the reforms ostensibly made the process more democratic, by transferring power from party leaders to party voters, in fact it gave much more power to the media and to people with money. And it made possible the rise of “outsiders”, candidates who do not have to rely on support from party leaders for their success, and who may not reflect the mainstream of the party.

Party Establishments vs. the “Outsiders” for 2016

Parties retain some influence in the nomination process. When party leaders across the country reach a consensus as to which candidate they prefer, their endorsements and support in raising money and organizing campaigns can give the preferred candidate a boost.

For the Republicans, that happened most recently in 2000, when George W. Bush was anointed early on as the GOP establishment favorite, but was challenged by “maverick” John McCain. The Arizona senator won the New Hampshire primary, which would normally have given him a great deal of momentum in the nomination process. But party leaders rallied around Bush and helped him defeat McCain in South Carolina, and eventually win the nomination.

This year, however, there is no consensus among GOP leaders as to which candidate they prefer, though – as noted earlier – there is a general agreement that Donald Trump should be stopped. So, the question for the Republican Party is this: Can the party prevail over the media (which gives Trump outsize coverage) and the moneyed interests (Trump himself) to prevent the business mogul from grabbing the nomination?

For Democrats, the consensus candidate was clearly Hillary Clinton – so much so that no other major Democratic politician has even entered the race. She has monopolized the endorsement contest, but that did not deter Bernie Sanders – clearly an outsider from the perspective of the party establishment – from entering the Democratic nomination contest. And the polls suggest that at least in the early states, he is faring quite well.

So, which is more predictive – current polls, or party endorsements?

Earlier this month, Matthew Dowd, a GOP political consultant and ABC News reporter, suggested that the current polls predict a Trump nomination. “Any Republican that has led for two months and led every state [as Trump has done] has won the GOP nomination.”

By the same logic, one could argue that Bernie Sanders will win the Democratic nomination, since he is projected to win the early contests in both Iowa and New Hampshire – and every Democrat who has done that has become the party’s presidential nominee.

But I think that party endorsements are more predictive than early polls. Too many voters simply don’t know the candidates and are not committed to any specific candidate this far ahead of the actual elections.

No doubt this view reflects conventional wisdom, or perhaps a lack of imagination. It’s difficult to envision a presidential contest in which the two major parties offer an avowed socialist and a celebrity businessman with no electoral experience – no matter what the polls tell us.