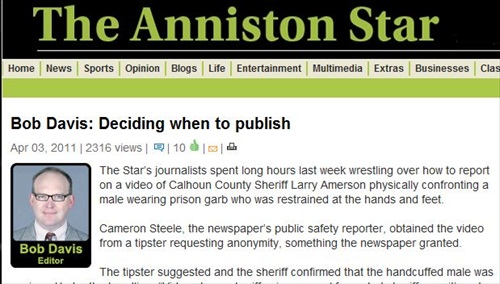 The Anniston Star decided to publish a video picturing a minor in "prison garb" because of the video's newsworthiness. (Credit: Anniston Star)

An Alabama newspaper editor explained the newspaper’s decision to publish an anonymously-submitted video of a sheriff “physically confronting” a minor in jail. The FBI has launched an investigation into the incident as a result of the video’s publication, but the sheriff reportedly said he asked for the FBI’s involvement.

The newspaper, the Anniston Star, did publish the video and has since published several follow-up stories on the incident, in which the sheriff, Larry Amerson, “confronts” the minor, who is “a male wearing prison garb who was restrained at the hands and feet.”  Amerson is the sheriff for Calhoun County, which includes Anniston.

The mother of the boy is suing the sheriff because of the incident, an April 5 Associated Press article reported.  The lawsuit alleges that “a jail officer threatened to kill” the 14-year-old boy and “called him a racial slur.”

Editor Bob Davis explained the newspaper’s decision to publish the video online and, in the print edition, still shots from the video as well as an article about the video. Mondo Times reports that the newspaper has a circulation of about 22,000.

The Anniston Star stated it received the video March 30.

Countering concerns about identifying a minor in jail, the video fairly well masks the identity of the minor, according to Davis.  The newspaper “digitally altered” the already “low-quality” video blurring the minor’s face. And, there isn’t any audio.

However, the mother of the boy and the boy’s age were both identified in an Associated Press article reporting the mother’s lawsuit against the sheriff.

Ultimately, Davis wrote that the Star upheld the SPJ’s ethics code tenet to “ensure that the public’s business is conducted in the open and that government records are open to inspection” by reporting the video.

See the video and the original report here.

Davis detailed the media ethics debate over the media’s identification of minors, noting that the Society of Professional Journalists’ ethics code advises to use caution.  Some tenets from the SPJ’s code relevant to this case include:

The SPLC noted that in “most states juvenile court proceedings and records can be closed to the public.”  And, as Davis noted in his Anniston Star column, “there are valid reasons” for protecting the identity of minors in news reports.

“Children, the thinking goes, should not be stigmatized for the rest of their lives for an error in judgment they made while growing up,” the SPLC wrote.

The SPLC also cited Poynter’s Al Tompkins’ list of “questions and factors” to think about before identifying minors.  Some of Tompkins’ considerations include the story’s newsworthiness and what benefit is obtained by naming the minor.