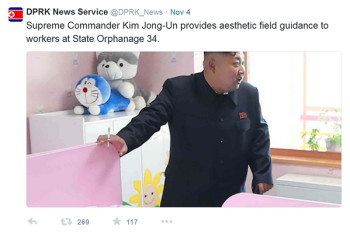 Major news outlets were duped by a fake Twitter account purporting to be run by the North Korean government despite the dubious description the “Official News feed of Democratic Peoples Republic of Korea.”

Newsweek, The Huffington Post, Fox News, , Reuters and others all fell for the fake tweets, news site Vox reported.

The phony Twitter, which boasts more than 23,000 followers, is maintained by two bloggers from the site Popehat, Vox said. Newsweek interviewed the pair, who used pseudonyms Patrick Popehat and Derrick Popehat.  They said they also post on other parody accounts but the North Korean one, in existence for five years, “is the most successful.”

Newsweek published this correction:  “Correction: This article originally quoted two tweets from @DPRK_News, a parody twitter account, and the two tweets have been removed.”

The Huffington Post fell for a Dec. 18 tweet “Culture and Film Minister Roh Nam-Hon warns reactionary film studios of Japan and U.S. to increase respect for DPRK, or face obliteration.”

Soon The Huffington Post posted this: “Correction: An earlier version of this story, including the headline, cited a Twitter account that is not affiliated with the North Korean government. We regret the error.”

Fox News was duped by a tweet that claimed, “Heroes force Japanese cinema bandits to bow before indomitable fist of Korean people. 10,000 years of life to Supreme Leader Kim Jong-Un!

Fox News deleted a blogpost from Greta Van Susteren on one of the tweets from the satire site.  She noted that “some say this is a hoax twitter account” but then argued that “One thing is certain, much of the sentiment in these tweets are consistent with the views. North Korea hates us and suspects the worst possible motives.”  Below, see a screenshot of the article’s cache.

The link for the story now goes to an error page. We’ve written to Fox News for comment.

Reuters reported on a tweet from the company about Game of Thrones author George R.R. Martin, according to a screenshot BuzzFeed News’ Jon Passantino captured.

Patrick Popehat and Derrick Popehat, the two pseudonymous tweeters told Newsweek, “We began the account simply for amusement, not as an effort to ‘troll’ the media,” Patrick said, noting that the site duped  Norwegian TV network with “an imaginary threat by North Korea to rain missiles on Cyprus. (At the time Cyprus had briefly detained a North Korean ship smuggling cigarettes.)” After that, Patrick temporarily stopped posting.

But in total, the pair list Wall Street Journal, BuzzFeed, Forbes, Verge, Huffington Post, and more as news outlets duped by their posts.