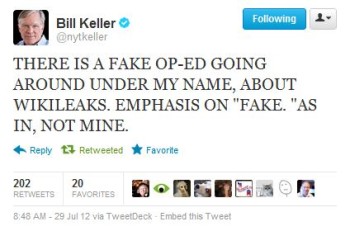 Keller tweeted July 29 about the phony op-ed, writing in all capital letters:

“THERE IS A FAKE OP-ED GOING AROUND UNDER MY NAME, ABOUT WIKILEAKS. EMPHASIS ON “FAKE. “AS IN, NOT MINE.”

Hours earlier, Keller’s account re-tweeted a link to the column. See below.

The op-ed, posted here on a website whose design closely resembling the New York Times, is titled “WikiLeaks, a Post Postscript.”  The website opinion-nytimes.com’s op-ed has Keller writing “I find myself in the awkward position of having to defend WikiLeaks. ”

“As those of you who have followed my turbulent relationship with WikiLeaks and its Guru-In-Chief Julian Assange know, I am first in line when it comes to distancing myself from his brand of transparency without government checks and balances.”

Gizmodo weighed in on the phony op-ed, calling it “The Fake NY Times WikiLeaks Op-Ed That Fooled Pretty Much Everybody,” and highlighted two tell-tale signs the site hosting the op-ed isn’t the real New York Times: ” the absent NYT favicon and the incorrect URL format.”

See above a screenshot from the fake op-ed with the URL, missing favicon, Keller’s name and the Times’ logo highlighted.

The Village Voice noted that one of the Times‘ own writers was had by the fake account, pointing to a tweet from Tim Bilton reading “Important piece by @nytkeIler defending @WikiLeaks and a plea to protect the First Amendment: opinion-nytimes.com/2012/07/29/opi…”

Bilton later tweeted that he deleted his original tweet, which he wrote was “from a fake NYT Bill Keller account.”

We have written to the New York Times for comment and will update with any response.

UPDATE: 7/29/2012 6:15 PM EST: The New York Times’ Danielle Rhoades-Ha responded to iMediaEthics’ email inquiry, confirming that “it is a fake op-ed” and providing Keller’s statement to All Things D:

“Ah, the social media hall of mirrors. Yes, the “WL Post-Postscript” Op-Ed is a fake. (Though it steals a few lines from my exchange a few days ago with Matthew Ingram, which was real.) My tweet calling the fake tweet a fake was real. This tweet assuring you that the tweet about the fake tweet is not fake is also real. All clear now, right? Good. It’s been real.”

WikiLeaks tweeted July 29 that it was behind the hoax, writing “Yes. We admit it. WikiLeaks (Assange & co) and our great supporters where behind the successful NYTimes banking blockade hoax on @nytkeller.”

UPDATE: 7/31/2012 2:05 PM EST:  Other clues the opinion-nytimes.com site isn’t the real deal include glitches in sidebar boxes. For example, see below a marked up screenshot. The Facebook, Most E-mail and Most-Shared box come up empty.

Also, the “Enlarge Image” box inside the story doesn’t work.