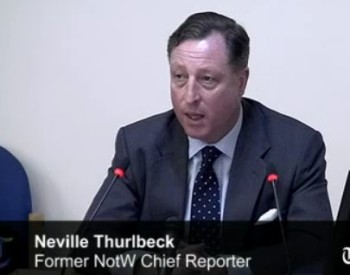 Former News of the World reporter Jeff Edwards told the Leveson Inquiry March 14 that his former editor at the newspaper asked him “to bribe a police officer for stories 30 years ago,” Bloomberg News reported.

Edwards, who hasn’t worked for News International in 27 years, said he wouldn’t comply and “was moved off the crime beat,” according to Bloomberg News.  He explained to the inquiry that:

“I thought it was indicative of the culture of that particular organization at that point in time. There was an element in there that had a tendency toward questionable, unethical behavior that manifested itself in a variety of ways.”

Meanwhile, the UK police’s public affairs director Dick Fedorcio told the Leveson Inquiry March 13 that there were “continuing patterns of leaks” from “senior officers” of the police to the press “in the months before February 2008.”

Fedorcio added that article was written on his computer and he had “advance sight” of the report.

The Guardian noted that “Fedorcio is currently on extended leave pending the results of the inquiry by the Independent Police Complaints Commission into the award of a PR contract to the former News of the World deputy editor Neil Wallis.”

Journalism.co.uk reported March 14 that former News of the World reporter Neville Thurlbeck was arrested “on suspicion of intimidation of a witness (contrary to Section 51 of the Criminal Justice and Public Order Act 1994) and encouraging or assisting an offence (contrary to Section 46 of the Serious Crime Act 2007),” according to the UK police.

While the police didn’t name Thurlbeck, they did note that the March 14 arrested man had been arrested April 5 related to phone hacking, which Thurlbeck was.

In a March 15 report, the Guardian reported that Thurlbeck blogged:

He wrote: “I vigorously deny the allegations of any wrongdoing,  which seem extremely far-fetched to me.”

We wrote earlier this week when former News of the World editor and News International CEO Rebekah Brooks was arrested again in the investigation into the press.

James Murdoch sent an “unsolicited seven-page” March 12 letter to a Parliament committee in which he said “I could have asked more questions, requested more documents and taken a more challenging and skeptical view of what I was told, and I will do so in the future,” according to the Guardian.

In his letter, see here, he noted that he plans to “remain committed to assisting all relevant inquiries and investigations” into News International.  He denied that his recent resignation from News International “reflected past knowledge of voicemail interception or other criminal wrongdoing.”

The committee he sent the letter to, the commons culture, media and sport select committee, is working on a phone hacking report, which Murdoch notes will “report on whether it was misled during its previous inquiry in 2009.”  See the letter here.

In the letter, Murdoch outlined his “role in the business” of News Corp., which he dated back to 1997.  He wrote that he “was never intimately involved with the workings of the News of the World…or any of the other newspapers within News International.”

The AP noted “In his letter, Murdoch mounted his most detailed defense yet, accusing his former lieutenants of working behind his back, acting without his authorization, and giving inconsistent testimony to Parliament.”