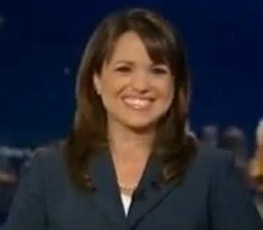 Gawker's publication of a sex story about Christine O'Donnell, pictured above in a screenshot from a YouTube video, has raised questions about standards. (Credit: YouTube, "PoliticsNewsNews")

Gawker has been accused of  sexism, sensationalism, and low standards after publishing an anonymous, first-person story of a sex encounter with Republican Senate candidate Christine O’Donnell.  The blog also paid for the Christine O’Donnell sex story.

O’Donnell is a candidate for U.S. Senate from Delaware and has already generated media controversy as old clips of her condemning pre-marital sex and admitting that she “used to dabble in witchcraft” have resurfaced during her campaign.

Gawker editor Remy Stern reportedly told Yahoo News’ Michael Calderone that the gossip blog paid the anonymous writer who has since been outed, in the “low four figures.” Stern explained that the source “approached Gawker about 10 days ago.  He had shopped it elsewhere but wanted it to be told correctly, and Gawker allowed him to do it first-person,” Calderone reported.

Stern defended the story’s publication because “it’s a good story” and claiming that the site fact-checked the source’s story.

Gawker also posted a story on its site explaining “why we published” the story and claiming that the site would “do it again.”  In the story, Gawker noted that the general reaction was very critical of the story and that Gawker supported publishing the anonymous account because it was evidence that O’Donnell was hypocritical in her public, conservative, “chaste”  values.

The story “was intended to expose the lies and hypocrisy of a U.S. Senate candidate and prominent Tea Party conservative who uses her own purported chastity and righteousness to market herself and gain political power.”

Perhaps most misleading is the headline, dubbed “sensational” by Yahoo News, because it reads “I Had a One-Night Stand with Christine O’Donnell” — and the account clearly states that the writer and O’Donnell didn’t have sex.

The anonymous source was outed by The Smoking Gun to be 28-year-old Dustin Dominiak, according to the New York Daily News.  (See The Smoking Gun’s story here.)  However, as of Oct. 29 at 3:30 PM EST, the post was still signed by “Anonymous.”

O’Donnell’s communications director, Doug Sachtleben, labeled the story “another example of the sexism and slander that female candidates are focused to deal with.”

The National Organization for Women (NOW) criticized Gawker, calling the story “sexist,” “misogynist” and “sexual harassment,”   even though the group is backing O’Donnell’s opponent, Chris Coons.  Regardless of political beliefs, NOW called it “slut-shaming.”

Further, NOW president Terry O’Neill explained in the statement published on Fox News that the group “repudiates Gawker’s decision to run this piece. It operates as public sexual harassment. And like all sexual harassment, it targets not only O’Donnell, but all women contemplating stepping into the public sphere.”

“Let me be honest: I look forward to seeing Christine O’Donnell defeated at the polls, but this kind of sexist attack is an affront to all women, and I won’t stand for it,” O’Neill said.

“If it was any politician whose private life diverged from his public life in such an interesting way, we’d be interested in that,” Stern is quoted as saying to Yahoo. “It had nothing to do with her being a woman.”

The Atlantic’s Andrew Sullivan labeled it “an anonymous, and vile, kiss and tell, which has not a smidgen of journalistic justification and is merely a cowardly, brutal and misogynist invasion of privacy (hence no link).”

MediaWeek reported that Gawker removed the advertising from the O’Donnell post.  Pulling ads prevents advertising companies from complaining about being associated with the story.  The story was published Oct. 28 at 1:50 PM EST.  By Oct. 29 at 9 PM, it had more than 850,000 page views.

iMediaEthics wrote about Gawker earlier this month, when journalism ethicist Stephen J.A. Ward advised journalists shouldn’t report the Brett Favre “sexting” allegations. Gawker-owned blog Deadspin broke the story, publishing claims that the football player sent sexual images to a TV personality.  But, even though the personality, Jenn Sterger, didn’t explicitly give permission for the story to be published, Deadspin went ahead with the story.

iMediaEthics wrote in May when Gawker-owned Gizmodo blog’s purchase of a lost iPhone resulted in a raid by police and ethical questions.  Gawker had paid $5,000 for the iPhone prototype found in a bar, and the police raided a Gizmodo editor’s house and seized some of his property.

iMediaEthics has written to O’Donnell’s team to ask if they plan any legal action, given her communications directors’ claim of slander. We will update with any response.