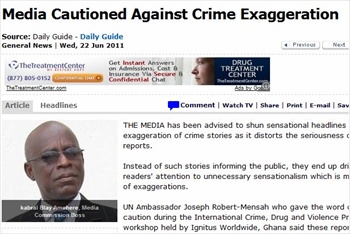 Ghana's media has been advised to report carefully on crimes and not sensationalize stories. (Credit: ModernGhana.com)

The ambassador, Joseph Robert-Mensah, reportedly told the media that instead of reporting information, those stories lessen “the seriousness of reports.”  His remarks were made at a youth crime watch group, Ignitus Worldwide, hosted workshop on International Crime, Drug and Violence Prevention.

Robert-Mensah reportedly attributed the media’s sensationalism to the media’s being “unsure of what they are supposed to do but also because the police are secretive in dealing with the media as a result of the way the media sometimes treat certain stories.”

He also called on the media and police to work together on crime education as the media can inform the public of issues the police deal with.

Should Politicians own Media Outlets?

Also in Ghana, there is a debate over the legality of politicians owning media companies, MyJoyOnline reported.

Kwame Karikari, executive director of  Media Foundation for West Africa, is calling for to bar politicians’ “rights to own media houses” because of the possibility of propaganda and exploitation of those outlets.

His comments were made at a forum hosted by the National Commission for Civic Education, according to the Daily Guide. Of course, since the politicians approve laws, Karikari noted that it “will be difficult asking them to promulgate a new law” restricting them. But, Karikari reportedly suggested a forthcoming Broadcasting Bill could “curtail some of hte challenges.”

“The problem is the media is becoming tools of partisan politics. That is where the danger is,” Karikari reportedly told MyJoyOnline.

According to myJoyOnline, Parliament member and media owner Kennedy Agyapong defended the right to own media outlets by arguing that “politicians own just a fraction of media outlets in Ghana and could not necessarily be blamed for the excesses in the media.”

Agyapong owns Net2TV and Oman FM, according to MyJoyOnline.

StinkyJournalism has written to Karikari for comment and will update with any response.

Also at the forum, the National Commission for Civic Education called on the public to boycott “irresponsible newspapers and radio stations that practice unripe journalism,” the Daily Guide reported.

According to the Daily Guide, if the public doesn’t buy or listen to that media, it will “discourage media outlets from engaging in reckless practices.”