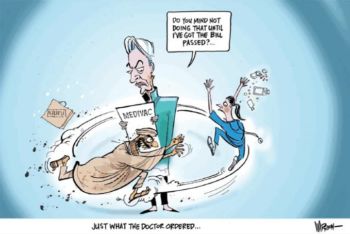 The cartoon in question (Credit: Daily Telegraph via Junkee.com)

A cartoon about an asylum-seeking man apparently attempting to assault a nurse didn’t break press guidelines and standards, the Australian Press Council ruled.

The cartoon showed a dark-skinned, bearded man in a brown robe with a head covering and sandals chasing a woman in scrubs with his hands out. In the middle is a man holding a paper reading “Medivac” with a word bubble, “Do you mind not doing that until I’ve got the bill passed?” The caption is “Just what the doctor ordered.”

The Telegraph defended its cartoon as editorial commentary and in the public interest, with the inspiration being a high-profile news story about an asylum-seeking man who received medical treatment in Australia and was charged with assaulting two nurses after allegedly touching their bottoms. The Telegraph added that its cartoonist wrote an article for readers that covered his reasoning for creating the cartoon.

That case happened in February 2019. The asylum-seeking man was from Afghanistan.

“In particular the pointed sharp teeth with his mouth open to suggest hunger, his hands drawn extended as claws and a lascivious facial expression while chasing a white woman implied asylum seeking or Middle Eastern men are savages and a threat to white women,” the council reported.

“Second, it suggested that asylum seekers/Middle Eastern men should not be provided with medical intervention because they are dangerous. Third, that the depiction of the male character implies that the wider asylum seekers and Middle Eastern community are dirty, predators and dangerous, and could create fear in the community of all members of both Middle Eastern, Islamic and asylum seeker background. Fourth, they said the depiction is an archaic picture of a foreigner which draws similarities to World War Two propaganda posters and should be considered in the context of the history of caricatures based on race and historical racist depictions.”

The press council explained that typically cartoonists get “significant latitude” because they are opinion pieces using “exaggeration and absurdity.” Because the cartoon was in the context of the news story of an asylum-seeker accused of assault, it was in the public interest, the press council found.

However, the press council noted that without that context, it would “certainly convey several offensive stereoytpical inferences about asylum seeker men or men from the Middle East.”

“The Council notes that even when read in this context the cartoon still conveys a level of stereotypical offence and has a prejudicial inference that the man was guilty although not yet convicted. However, the Council accepts that there was sufficient public interest in commenting on the case of the man in the context of the charges against him and the political debate. The Council considers that to the extent there was substantial offence or prejudice caused it was justified in the public interest.”