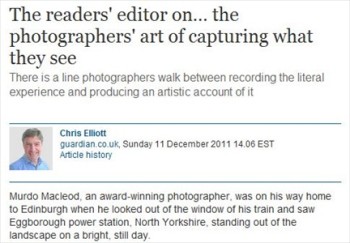 The Guardian’s readers editor, Chris Elliott, wrote Dec. 11 about issues in photojournalism ethics and altering images. “There is a line photographers walk between recording the literal experience and producing an artistic account of it,” Elliott argued.

Elliott cited a case of a Guardian photo questioned for Photoshop earlier this year. “Award-winning photographer” Murdo Macleod took pictures on his way home on the train and submitted them to the Guardian‘s picture database for stock footage. But, when one of Macleod’s photos was cropped and used Feb. 11 with the story “UK Greenhouse Gas Emissions Fail,” readers asked if the picture was Photoshopped, Elliott explained.

Elliott explained that because of the cropping, Macleod’s photos looked more dramatic.  He noted that the newspaper’s guidelines don’t allow “Photoshop techniques to distort an image.”

Macleod argued on photos: “The camera doesn’t capture an objective reality; we are trying to capture something more dramatic and more interesting, trying to heighten the experience. It is about expression, as photographers aren’t there to blindly record the literal experience. But there is a line that has to be walked. You must be aware of the issues and exercise extreme caution.”

We wrote Dec. 17 when Utah newspaper the Standard-Examiner apologized for publishing a Photoshopped image on its front page in November.  According to the stadnard-Examiner’s editor, Andy Howell, the photo was “submitted by a trusted contributor” who said he didn’t know photojournalism guidelines on Photoshopping.