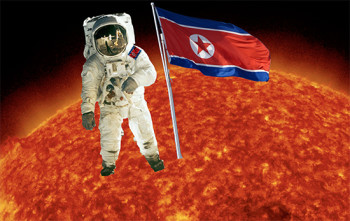 No, North Korea didn’t land a teenaged astronaut on the sun in the dark of night.

Apparently, the North Korean teen astronaut story got more than a million views on Waterford Whispers News’ site too, its editor told the (Irish) Journal.

The satire story claimed that 17-year-old astronaut Hung Il Gong went by himself in a rocket and made it to the sun in four hours. As evidence, the satire article cited a (fake) “North Korean central news anchor” and his report about the alleged mission, complete with a fake still image from the broadcast.

Waterford Whispers News’s About Us page identifies the site as ” the leading satire news source in Ireland, and had over 1.7mn visits in Jan ’14.” The site also has a disclaimer page that reads:

In a recent interview with Irish news site the Journal, Waterford Whispers News founder and editor Colm Williamson said, “The stories that tend to do best are the ones that people get taken in by — the North Korean story was by far our most popular.”

He added that the North Korea story got more than a million views.

How News Outlets reported on the Astronaut Claim

Canada Free Press, a news site, reported on the alleged astronaut landing. The story is skeptical of the claim, but apparently didn’t realize Waterford Whispers News was a satire site.

“The source for this is something I’ve never heard of before today – a web site called Waterford Whispers News. There was a report last year from Investors Business Daily that the Norks had announced their intention to put a man on the sun.

“I can’t find anything on the English-language version of the KCNA, which is the Norks’ official news agency site, but the report says it was uttered in a televised newscast for which they offer no video as backup. I don’t know. I suppose it says everything about the madcap nature of this regime that you find it hard believe they would really make such a claim, but you can’t be entirely sure.

The Canada Free Press author even argued that the North Korean news must have originated the claim with a real news story because of its history for propaganda.

“Oh please, don’t tell me some wise-# made this up, and that the Norks aren’t really making this claim. After all, they did claim Kim Jong Il shot 11 holes-in-one the first time he ever played golf. That’s slightly less plausible than this, but they clearly aren’t too concerned about incredulity from the masses.”

If not, Canada Free Press went on to suggest that maybe a member of North Korea’s propaganda made it up.

Tweaktown, a tech website, reported on the astronaut landing as if it were real. The article showed no skepticism for the tale, and also had no sourcing, but did quote “a North Korean central news anchorman” about the landing and posted the Waterford Whispers News’ image of the (phony) anchor’s news report.

KTAR, an Arizona radio station, published a Jan. 24 story about the sun voyage. However, KAR’s article was skeptical of the claim, acknowledging it was a “fake report that went viral.”

However, KTAR didn’t mention the Waterford Whispers News story being satire, and instead seemingly argued that the North Korean report was bogus.

Ireland’s The Sunday World also reported on the astronaut tale, according to the Journal, which showed a screenshot of an article on the Sunday World‘s website.

A search of Sunday World‘s website for “Hung il Gong” produced no results, suggesting the news tabloid unpublished its report. iMediaEthics has written the Sunday World for more information.

iMediaEthics found proof that the Sunday World did publish — and later unpublish — a report on the astronaut story. We searched for the text of the Sunday World article, as given by the Journal‘s screenshot. We found an excerpt of Sunday World‘s story on website News Whip. The article is titled “North Korean’s ‘land man on the sun’ story is a hot hit,” and carries a SundayWorld.com byline. The link to SundayWorld.com goes now to an error page but the hyperlink confirms it used to be a link to a story about the astronaut claim.

See below a screenshot of a Bing Cache for the article.

Policy Mic also reported on the astronaut landing, but instead of being duped, the site reported the tale was fake, explaining to readers that the story was first published on Waterford Whispers News.
,
Likewise, The China Post reported on the story, questioning “why did people around the world believe it,” especially since a little online research proves it was fake.  The China Post wrote:

“It could be because North Korea is notorious for producing ridiculous stories. For people only familiar with North Korea through the occasional news story about their more outlandish antics, North Korea is already a satire of a country.”

Last month, the media was hoaxed by a story claiming that North Korea’s leader Kim Jong-un fed his naked uncle to 120 dogs, as iMediaEthics reported. While the uncle, Jang Song Thaek, was executed, the dog tale was made up.  The story originated in a satire post.