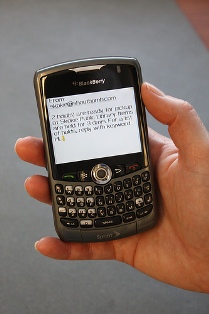 Texts to The Namibian newspaper are printed three times a week in the newspaper and in an online section.(Credit: Skokie Public Library, Flickr)

Letters to the editor have been largely replaced by e-mails and readers comments these days.  But, in Namibia, even e-mails are old-school.

Why write when you can text?  In Namibia, readers text the newspaper to comment on articles, suggest stories, and more.

PBS reported April 13 that texting is the way to go when contacting the newspaper The Namibian.  In August 2007, the newspaper created SMS pages where editors post a collection of texts sent to the newspaper.

PBS reported the SMS program was created so readers could text responses to individual articles, but now readers text in about any and everything.  Messages are printed on two pages of the newspaper three times a week and posted on the Web site.

“We wanted letters to the editor, but that only allows literate people to communicate in quite a long way.  This way allows more people to have their say and it’s quick and simple – everybody’s got a phone, it gives everybody a  chance to be involved,” PBS reported Carmen Honey, an editor at The Namibian said.

Is a short text message a sufficient note to a newspaper?  Is it worthy of printing?

Texts must be English and The Namibian will edit for grammar, clarity and libelous statements.  As PBS reported, texts to the newspaper don’t cost more than a normal text.

According to PBS, The Namibian is an independent newspaper with newsstand sales of 27,000 a day (with an estimated 10-person pass-along rate) and a Web site.

Other English newspapers in Namibia include New Era and Namibia Economist.

StinkyJournalism has contacted The Namibian and will post any response.