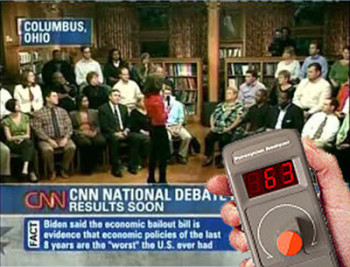 Editor’s Note: David W. Moore, author of “The Opinion Makers: An Insiders Exposes The Truth Behind The Polls,” was senior editor at the Gallup Poll for thirteen years. Before that he was a professor of political science at the University of New Hampshire and the founder and director of the UNH Survey Center. Moore’s expertise and willingness to speak truth to power is what singularly qualified him to weigh in on iMediaEthics about CNN’s use of junk science during the Presidential Debates—and how it’s deceptive to say it’s polling or “giving voters a voice in network coverage.”

It’s a technology that’s about a quarter of a century old, but Southern Methodist University (SMU) professor, Rita Kirk, persuaded CNN to use the meters during the current presidential debates, because (as she told Rhonda Roland Shearer, founder of iMediaEthics, in a personal interview), “two talking heads is boring television.”

Her argument appealed to the media moguls, who apparently accept the premise that being American is never having to listen to political leaders talk about serious issues.In its never-ending efforts to entertain voters during this critical election campaign, CNN has been using electronic audience meters to measure the impact of the debates on an arbitrarily chosen group of people, who are able to express in “real time” their positive or negative feelings about what they’re watching. Should Americans really care what 32 people from Ohio think?

The audience meter is called a Perception Analyzer Dial described by a news story from SMU as a “palm-sized electronic dial meter.”When focus group participants like what they are hearing, they turn the knob on the dial to the right; when they don’t like the candidates or their ideas, they turn the knob to the left.

It is very difficult to correlate the exact locations of candidates’ statements within the squiggly lines. The speed of spoken words  occurred at a much  faster rate than the slow wave of colored lines in the graphic.

If it’s not a poll, what can those squiggly lines tell us?

SMU’s Dr. Kirk, who, with her partner, Dr. Dan Schill. convinced CNN to use the dial-a-meters, told Ms Shearer that the process is not a poll. The number of people in the audience is too small for the results to be presented as a poll, she said, but that did not deter CNN’s Soledad O’Brien from suggesting that the 16 men and 16 women from Columbus, Ohio somehow represented a “microcosm” of the 200+ million men and women in the country.

Dr. Kirk noted that while most polls include a lot of people with few questions, the dial-a-meter technology uses only a few people with a lot of questions – thus, apparently, balancing everything out. Perhaps the ultimate goal is to have just one person with a jillion questions, which could reduce conflict and save a lot of money?

The SMU dial-a-meters avoid such a boring activity, because each individual silently makes his or her own instantaneous rating, thus avoiding group discussion and in-depth thought, and arriving more directly at the superficial, top-of-mind opinion that the media love so well.In the meantime, CNN uses a group of 32 voters, what people in the trade call a “focus group,” to rate the debates. The problem with such groups, of course, is that they are designed to obtain in-depth responses from the participants, who actually discuss the issues with each other and arrive at more considered views than what polls normally measure.

“People react more negatively when candidates attack each other or when they are overly detailed in the explanation of their policies.” – Dr. Dan Schill

Some of the stunning insights provided by these meters are suggested by Dr. Kirk, who noted to Ms. Shearer that “Republicans tended to think favorably of McCain on the war issues and on, you know, two or three issues.” Indeed, the squiggly lines across the bottom of the screen during the first debate were color coded by whether the focus group participants were Republicans, independents or Democrats. Unlike the sales pitch which extolls the enhancement of democracy, the “Perception Analyzer” meter, is also described on its web site, as able to exert control over forum group members. The marketing literature advises, “Circumvent dominant respondents and minimize negative group dynamics while giving more passive respondents an equal voice.” Hal, is that you?

The lines often diverged from each other, showing Democrats positive about Barack Obama and Republicans positive about John McCain, with independents in the middle. For several decades, pundits had suspected that voters responded to political leaders on a partisan basis, but now with SMU’s dial-a-meters, their suspicions had finally been confirmed.

Men versus Women in the VP Debate

In the second debate with the vice presidential candidates, the squiggly lines across the bottom were presented separately for men and for women in the focus group. This seemed appropriate, since the two veep candidates were widely perceived as being of different sexes.

One interpretation is that the divergence was caused by partisanship, because men tend to be disproportionately Republicans and women disproportionately Democrats. But an alternative interpretation is that the dial-a-meter results were much more profound, reflecting the deep gender divide in America – where men tend to like young, pretty women who smile a lot and wink at them, while women like older, well-established, successful men who can take care of them (and who are also emotionally vulnerable).

Any possible value is lost due to O’Brien’s priming

Shearer points out that even that possibility, however, is tainted by CNN’s priming of the focus group before the debate started. (Ms. O’Brien said, “A couple of things that we’re interested to see is how is negativity going to play? Because we know from research, negative go negative, dial testers tend to turn down the dial. They hate it.”)It’s at least remotely possible that after the debate, researchers could analyze the data generated by the dial-a-meters to arrive at some insights about the dynamics of opinion change.

Ms. O’Brien suggestion likely influenced the participants. The net result seemed to be that she scared the participants into not being negative themselves. During the vice presidential debate, the squiggly lines across the bottom never ventured into negative territory, ranging only from neutral (50) to positive (100) .

Whatever the post-debate utility of the data to researchers (Is there any?), it is clear that a contemporaneous viewing of the debate, and the squiggly lines running under the candidates, hardly provided CNN’s viewers with any meaningful aid to understanding the issues discussed by the candidates.

The positive side of the dial-a-meters is that they diverted voters from reflecting on the depressing problems being addressed by the candidates into the less stressful activity of wondering what those squiggly lines really meant.

If that’s not a reasonable role for the media to play in a democracy, then what is?

For those interested here is the transcript of O’Brien’s comments about the focus group before the VP debate.

David W. Moore is a senior fellow with the Carsey Institute at the University of New Hampshire. He is a former Vice President of the Gallup Organization and was a senior editor with the Gallup Poll for thirteen years. His new book is The Opinion Makers: An Insider Exposes the Truth Behind the Polls (Beacon, 2008). Publishers’ Weekly refers to it as a “succinct and damning critique…Keen and witty throughout.”