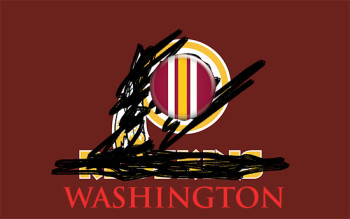 “Enormously popular and deeply ingrained in sporting culture, the Redskins name is a throwback to a vanished era of perniciously casual racial attitudes,” the Daily News wrote. “No new franchise would consider adopting a name based on pigmentation — Whiteskins, Blackskins, Yellowskins or Redskins — today. The time has come to leave the word behind.”

Because the Daily News admitted the name Redskins is “derogatory,” the newspaper said it will no longer use the word. The newspaper explained why it just now decided to stop using the team’s name:

“Why drop the term now? Why not yesterday or last year? The answer is that, as attitudes evolve, words can move from common parlance to unacceptable in good company.

However, the Daily News listed a couple of exceptions to its ban on the term. It will leave the term in “reader letters about the controversy and in quotations in stories about the controversy when a full quotation seems particularly relevant” as well as in “NFL stats packages and on a Washington team page that are provided by vendors.”

The Washington Post announced last month it would no longer use the term Redskins on its editorial page, as iMediaEthics wrote at the time. Earlier this summer, the Seattle Times also said it would stop using the term.

Last year, Slate, Mother Jones, the New Republic, and the Richmond Free Press banned the name. In 2012, the Kansas City Star said it wouldn’t use the term either.

Despite the waves of criticism, the Washington Redskins’ owner, Dan Snyder, has stood behind the team’s name.