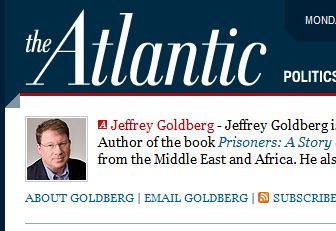 Detail from Jeffrey Goldberg's The Atlantic blog. He is "a national correspondent for The Atlantic" and "also writes the magazine's advice column," according to his byline bio.

That a magazine chooses to handle its Web content differently than print is quite a different statement than claiming that the magazine’s Web site has no standards.

But that is exactly what Jeffrey Goldberg, a national correspondent for The Atlantic, suggests in a blog post last week, (Mar 12), about The Atlantic, his employer.

While attacking another Atlantic writer’s character and report on The Atlantic Web site, he also simultaneously lets his employer have it. Goldberg states (emphasis mine):

” Andrew Sullivan should be thankful that The Atlantic’s fact-checking department has no purview over the magazine’s Web site. The magazine’s fact-checkers vet each word that appears in the print magazine for accuracy and context, but because they have no authority over blogs (or anything else produced for the Web), Andrew is free to publish malicious nonsense, such as the series of maps he published yesterday, maps which purport to show how Jews stole Palestinian land. Andrew does not tell us the source of these maps (in a magazine with standards, the source would be identified), but they were drawn to cast Jews in the most terrible light possible.”

Having one journalist publicly attack another writer within the same publication is unusual, to say the least.  To have that writer imply, in a blog owned by the magazine on the magazine’s own Web site, that their employer has no standards, is astonishing. The fact that Goldberg’s admonishment of The Atlantic and one of their other writers remains on the site, suggests Goldberg might be right–that The Atlantic magazine ownership has no control of its online content–including Goldberg’s–and no standards.

However, something must have happened behind the scenes in The Atlantic editorial offices because Goldberg soon posted an “Update”–not a correction–that suggests Atlantic editors, indeed, have some controls over his piece and exerted it asking him to make clear that The Atlantic does have standards.

Goldberg writes: “UPDATE: When I implied above that a magazine with standards would not allow Andrew to misinterpret history, I should have stated that the Atlantic‘s Web site has no fact-checking standards, and not that it has no standards at all.”

I’m relieved, aren’t you?
(I have written to Goldberg to ask for comment and will report any updates. I wanted to ask about his March 14 follow-up blog post, “The Goldberg Unilateral Disengagement Plan.” Goldberg writes: ” I responded quickly, and angrily (even making a mistake in accusing Andrew of not attributing the map).” [I note here there is no correction mentioned in his original Mar 12  post where the map attribution error occurred. The supposed error was cited as Goldberg’s basis for accusing his magazine of having no standards).