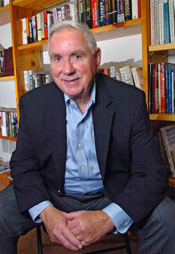 In his new book, The Ethical Journalist: Making Responsible Decisions in the Pursuit of News, former managing editor of the Philadelphia Inquirer, Gene Foreman, takes a new approach to journalism ethics: the case study.

And he’s not alone. Two other upcoming books, Making Hard Choices in Journalism Ethics, by David E Boeyink and Sandra L Borden (which will be released this coming February), and a book put together by the Society of Professional Journalists (which they plan to publish next year), will both use case studies as educational tools for young journalists.

Last week, the Inquirer spoke with Foreman, who also taught journalism at Pennsylvania State University from 1998-2006, about his new book (we heard about the interview via stltoday.com). Foreman explained that most current journalism ethics textbooks don’t provide examples that show how to apply the guidelines for making difficult ethical decisions. He told Inquirer staff writer Michael D. Schaffer, “I think [students] ought to know, ‘Here are the consensus guidelines in the profession.’ Here are all the experiences, good and bad, that practicing journalists have had.” His book alleviates that problem by providing detailed accounts of some of the industry’s most pressing ethical dilemmas — chapter titles include, “Conflicts of Interest: Divided Loyalties,” “Making News Decisions About Privacy,” and “Ethics in the Changing Media Environment.”

David Boeyink agreed with Foreman, explaining to Schaffer that journalism ethics courses spend “too much time focusing on top-down reasoning as a way of resolving ethical issues.” And Fred Brown, vice chairman of the SPJ ethics committee, explained that examining case studies helps students figure out what questions they should be asking when faced with ethical issues.

“In the long term, ethical journalism promotes the news organization’s credibility and thus its acceptance by the public. This translates into commercial success. What journalists have to sell is the news – and if the public does not believe their reporting, they have nothing to sell. Consumers of the news are more likely to believe journalists ’ reporting if they see the journalists as ethical in the way they treat the public and the subjects of news coverage. Just as a wise consumer would choose a product with a trusted brand name over a no-name alternative when seeking quality, journalists hope that consumers will choose their news organization because it behaves responsibly. Thus ethical journalism can also be a profitable journalism that provides a livelihood for the journalists and their families, along with a financial return for the investors in the newspaper, broadcast station, or online news organization.”

Just last month Foreman wrote an op-ed for the Inquirer in which he specifically addressed the issue of credibility and the public’s dwindling faith in news media. “Having devoted a lifetime to working in journalism, I always find it disappointing to hear the profession’s moral principles dismissed so derisively,” he writes. “But neither is it a surprise. Widespread hostility toward the news media, which has only intensified in the last quarter-century, is regularly documented in one public-opinion survey after another.”

He goes on to argue that this hostility is unfounded, more of a “public relations problem” than a reality. Corrections are “morally necessary” but “only reinforce the public’s perception that those transgressions are commonplace.” And negative portrayals of journalists — on television, by talk-show hosts and politicians — don’t help the matter.

Foreman also finds fault in what he calls the “geek news revolution,” the online writers who “[dismiss] the value of the mainstream news media.”

In his interview with Schaffer, Foreman addresses Internet journalism from a different angle, taking issue with newspaper staff writers who, in addition to their printed work, also write unedited blogs. “I detest that,” he told Schaffer. “I’ve read arguments written by intelligent people who say, ‘Let’s let the readers be our editors, that if we get something wrong, they call us, we check it out, and we put up a correction.’ Now, this is really, really bad because harm can be done by erroneous information getting online.”

But in the excerpt from his book, Schaffer contends that ethical journalistic practices — and the conversations that take place to ensure them — have “matured” in recent decades. “Most journalists see theirs as a noble profession serving the public interest, ” he writes. “They want to behave ethically.”

While nothing can replace editorial oversight (for the record, posts on Stinky Journalism are reviewed by two editors before publication), perhaps Foreman can take comfort in his own appraisal of the industry. Most journalists writing on blogs, his book seems to argue, would do their best to avoid misinformation or errors. And in the case of an online ethical mishap, perhaps others can learn from the situation.