Journalist Wife of Ohio Senator Apologizes for Videotaping, but Not Reporting on Husband's Political Opponent 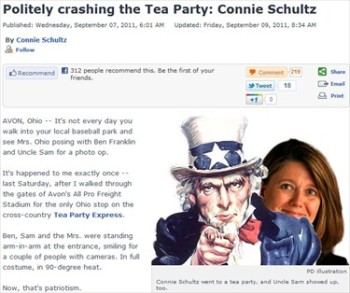 She explained that she reported on the event because she’s been “criticized” for reporting on the Tea Party from a distance.  However, in her Sept. 8 apology column, Schultz, who was named a Metro columnist Sept. 4, stated she made two mistakes.

First, Schultz, who is married to U.S. Democratic Senator Sherrod Brown, said she failed to include that State Treasurer Josh Mandel spoke at the event. As she explained, her own newspaper has reported that Mandel is her husband’s “likely 2012 Republican opponent.”

Further, Mandel “frequently attacks” Schultz’s husband “in public interviews and speeches, and the Tea Party event was no exception.”

She claimed she didn’t include Mandel’s appearance because she didn’t want readers to think she was “singling him out for criticism, or promoting my husband.” Instead, she wrote she should let readers decide if she has a conflict of interest and commented that “transparency matters.”

Schultz Taped Husband’s Opponent’s Speech
Schultz stated her second error was in videotaping Mandel’s speech – and no other part of the event. She said she taped him in response to seeing “A videographer for the Democratic Party” kicked out of the event.  By taping Mandel, however, people questioned if she was reporting on Mandel or collecting information for her husband’s campaign, NBC-affiliate WKYC reported.

WKYC added that “video appeared on various sites of [Schultz] taking video of Mandel’s remarks at the event.”

For example, Third Base Politics highly questioned Schultz’s videotaping and accused her of “being paid to attend the rally and cover it for The Plain Dealer” and of “simultaneously working as an opposition research videographer” for her husband.

Regional Ohio newspaper the Sandusky Register’s Tom Jackson argued that Schultz shouldn’t have to apologize or be concerned because the newspaper should “Let Connie be Connie.”

“I don’t see why. Connie is a left-leaning opinion columnist. Nobody who reads her columns would expect her to gush with praise for the Tea Party. She shouldn’t be expected to pretend to be ‘objective.’

“Obviously, if she wrote a column roasting Mandel as Ohio’s most evil politician, that would show poor judgment. She should probably stay away from the Senate race. But I don’t see where she’s obligated to go out of her way to give Mandel free publicity.”

In a May 2011 NPR interview about political wives, Schultz noted that she “took a leave of absence” from the Plain Dealer when her husband decided to run for Senate. She explained that “primarily in the beginning, it was to avoid even the appearance of a conflict….As soon as you even start worrying that you could give the appearance of it, you start reining yourself in.”

Schultz’s “leave of absence” began in February 2006 and returned in November of that year after her husband won the Senate seat.

iMediaEthics is writing to Schultz for further comment and will update with any response.