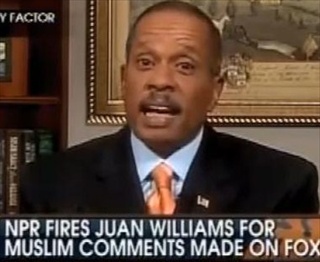 Juan Williams, pictured above in a YouTube video posted by "johnnydollar01," was fired from National Public Radio for comments he made on Fox's "O'Reilly Factor" Oct. 18, 2011. (Credit: YouTube, "johnnydollar01")

Juan Williams penned an article reflecting on the past 12 months for Fox News Oct. 25.  Williams, as iMediaEthics has written, was fired from NPR Oct. 2010 after commenting on Fox News’ Bill O’Reilly show that he gets “worried” and “nervous” when he see “people who are in Muslim garb” on airplanes.

“So, in the year since being labeled a bigot, a bad journalist and fired from NPR, what have I learned?”

Williams highlighted the heavy politicization of language in the media, commenting that “in the year since I was fired the political pressure on Americans to be politically correct, to never stray from the party line, and avoid saying anything that someone may call offensive continues to polarize the country.”

He labeled himself NPR’s “whipping boy,” but still said he is a “huge fan of the NPR audience and the local stations.”  He also defended himself in the firing and claimed he “violated no journalistic standard by honestly expressing my feeling.”