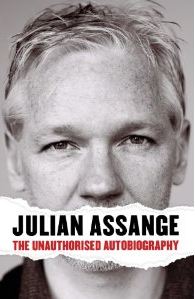 As iMediaEthics has previously written, WikiLeaks’ Julian Assange agreed to a book deal in late 2010 in order to pay his legal expenses. Then, in July, he said he axed the memoir because he said the book “could give ammunition to US prosecutors.”  Assange had stated previously that he hoped the book “would become one of the unifying documents of our generation.”

However,  the book –titled “Julian Assange: the Unauthorised Autobiography” –has been published and landed on UK bookshelves today.

The book’s UK publisher Canongate has published the memoir because Assange never returned the advance, New York Observer reported.  The US publisher Knopf isn’t publishing the book, however, according to the Observer.

Canongate issued a statement explaining its decision to publish:

“We disagree with Julian’s assessment of the book.  We believe it explains both the man and his work, underlining his commitment to the truth.  Julian always claimed the book was well written; we agree, and this has encouraged us to make the book available to readers”

“We will publish the unauthorised first draft which was delivered to us in March.”

The UK Independent explained that Scottish writer Andrew O’Hagan ghost wrote the book and “spent more than 50 hours with Mr Assange at the Norfolk country house which currently serves as his bail address.”

According to the Independent, Canongate’s lawyers explained that Assange didn’t pay back the “£500,000 advance” for writing the book.

The Independent added that Assange had “a twelve-day window to seek an injunction,” which passed Sept. 19.

The Guardian set up a live blog to update on responses to and news about the book.  According to that blog, “the first thing to say about the book is that it is very obviously a fragment.  The narrative ends before the US Embassy cables release in November last year and Assange’s arrest and subsequent bailing under curfew.”

The Guardian noted that Assange is “highly critical” of the news outlets he called “media partners” in the Cablegate publication, specifically of the Guardian and New York Times.  According to the Guardian, recently resigned New York Times executive editor Bill Keller “is personally criticised very harshly in prolonged passages.”

Yesterday afternoon, WikiLeaks tweeted a link to the book on Amazon.co.uk and that “Life is stranger than fiction: UK publisher publishes unauthorized Assange manuscript.”

Assange also issued a lengthy statement (here) on WikiLeaks.org. He denied that he wrote the book but noted that he has “the copyright of the manuscript, which was written by Andrew O’Hagan.” Assange stated that O’Hagan “stands by me.”  Further, Assange described the book as a “narrative and literary interpretation of a conversation between the writer and me” and commented that the book “is entirely uncorrected or fact-checked by me.”

Assange, who noted he hadn’t seen the book, wrote:

“This book was meant to be about my life’s struggle for justice through access to knowledge. It has turned into something else. The events surrounding its unauthorised publication by Canongate are not about freedom of information — they are about old-fashioned opportunism and duplicity—screwing people over to make a buck.”

The Guardian’s Nick Davies agreed with Assange in criticizing the book’s publishers for lack of fact-checking and lack of a complete product, among other things.

Assange denied reports that he tried to “pull the plug on the deal” and instead claimed that in early June he wanted to “cancel the contract as it stood” and replace it with a new one giving more time as Asssange awaited a July 12 extradition appeal hearing.  Assange stated that the first installment of money from Canongate “sits unspent in an FSI client account.” (FSI is the name of his former law firm, Finers Stephens Innocent.)  Assange alleged that FSI charged him too much and he is trying to get some of the money back.

Notably, Assange stated that Sept. 16 he asked for “five days for legal review of the manuscript by my own barrister” so that any information could be redacted “to protect our people from any adverse legal consequences that may arise from this publication.”  Interestingly, Assange went ahead and published all of the diplomatic cables comprising Cablegate without any redactions despite similar concerns earlier this month.

He also rejected Canongate’s claims that he had twelve days to get an injunction and instead said he only had five.  Assange addded that he tried to get an attorney to help him in the matter, but was unsuccessful. He wrote:

“From the moment I was informed of Canongate’s actions, I spoke to numerous solicitors. These solicitors were unwilling to take my case because I as the claimant must give a cross undertaking for damages when applying for an injunction. This means that I would be required to demonstrate that I was in the financial position to undertake to pay damages to Canongate in the event that the injunction should not have been granted. I am not in a position to provide such an undertaking. Canongate is aware of this. “