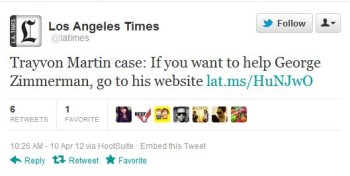 This tweet from the LA Times prompted questions of bias or endorsement, according to a post on the LA Times readers representative's blog. (Credit: LA Times, screenshot)

The Los Angeles Times updated a headline on a story because readers criticized its wording as suggesting “support of [George] Zimmerman’s fundraising efforts,” according to a post on Los Angeles Times readers representative Deirdre Edgar’s blog by “social media team” Martin Beck and Lindsay Barnett.

But, readers questioned if the Los Angeles Times was backing or promoting Zimmerman and his efforts and tweeted that the newspaper was exhibiting bias and a lack of credibility, according to Beck and Barnett’s publication of a selection of tweets.

The Los Angeles Times updated its headline to instead read: “Trayvon Martin case: George Zimmerman website solicits donations” so it didn’t “read too much like an endorsement,” Beck and Barnett wrote. The tweet is still posted on the Los Angeles Times Twitter account here.

When iMediaEthics looked April 11 at 9:25 PM EST, there wasn’t any note about the headline change on the original story. We have written to Edgar asking if, given the criticism of this headline, the newspaper will add a cross-link to the story to inform readers. We will update with any response.

As Beck and Barnett explained, the Los Angeles Times’ Assistant Managing Editor Henry Fuhrmann told editors that  “Just a reminder, tweets have to stand on their own, without the context, nuance and background afforded by the item we are linking to. In other words, don’t assume that readers will follow the link. And remember that irony or sarcasm may not always translate.”