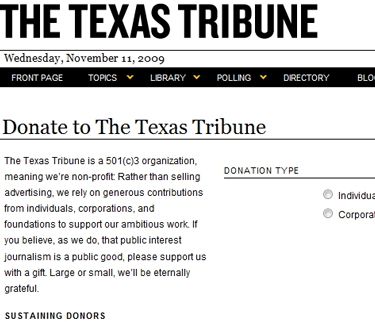 In response to failing economic models, some pioneering newsmakers are coming at the problem from a different angle: non-profit journalism.

Last Tuesday The Texas Tribune, a new online-only, non-profit news site, joined the handful of journalism outlets already working with a non-profit model: the Voice of San Diego, The New Haven Independent, Propublica, and the MinnPost, which just marked its second anniversary, are a few of the most successful.

The Texas Tribune’s launch offers the opportunity to examine the ethical issues raised by this increasingly popular funding model.

Like other non-profit news outlets, The Texas Tribune is funded by donations — in this case, $750,000 in grants from Houston Endowment and the John S. and James L. Knight Foundation, and another $1 million from co-founder and chairman John Thorton, according to editorsweblog.org.

Funding also comes from individual memberships, like those that support public radio. Smith told editorsweblog.org that the site has already received some 1,400 donations from individual supporters ranging from $50 to $5,000.

In an interview with Jennifer Lush at editorsweblog.org, The Texas Tribune’s editor in chief, Evan Smith (formerly editor in chief at Texas Monthly), talked about the ethical issues that can arise in a non-profit model, particularly the possibility of receiving editorial pressure from donors. He compared the relationship to that of advertisers and for-profit journalism — namely, that those who fund a newspaper, whether through ads or donations, shouldn’t have any influence over content. But reality doesn’t always live up to ethical ideals. Just recently, the Detroit Free Press seems to have taken a story suggestion from an advertiser.

Stephen J. A. Ward, Director of the University of Wisconsin-Madison’s Center for Journalism Ethics, discussed similar ethical issues in a recent article posted on J-Source.ca. Like Smith, Ward compares the non-profit/donor relationship to the more traditional advertising/editorial relationship. “Why assume that funding from a foundation,” Ward writes, “is less fraught with possible conflicts then advertising from Zellers?”

As he has done with social media, Ward offers some guidelines for non-profit journalism, suggesting that news outlets should “Establish a process for dealing with conflicts,” that includes these four components:

1. Nuanced descriptions of the nature and variety of conflicts of interests in journalism.

2. A process that encourages reporters to bring forward possible conflicts to a committee (or some other entity) that follows a fair and open process to manage the issue. Deal with potential conflict as they arise, not after the story has been published.

4. Make public your conflict-of-interest policy and provide a process by which the public can report (or complain about) perceived conflicts.

Of course, transparency is also crucial, and The Texas Tribune seems to understand that. They already have a page listing Founding Investors and Founding Corporate Sponsors, and have space designated for Sustaining Members, Investors, and Corporate Sponsors.

When talking to Lush, Smith appeared confident that The Texas Tribune’s supporters aren’t interested in editorial power. “Donors don’t expect that we’re going to write about their issues or about their enemy’s issues in a negative way,” he said, “they’re not looking for us to take sides – they’re supporting the principle that hovers above all this activity: that journalism in the public interest has value.”

But he’s also prepared to push back if donors do try to wield control. “Any donor who is unhappy with the coverage we provide because of such an expectation is welcome to his or her money back,” he told Lush. “I’d rather lose my funding than lose my integrity.”

With $3.7 million already banked, enough to keep The Texas Tribune afloat for nearly two years, Smith can afford a little bravado. But one has to wonder how he’d react when the coffers are running low.