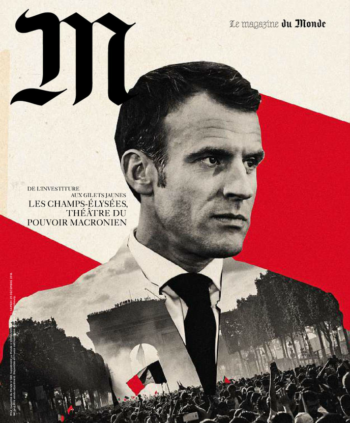 The illustration was from Dec. 29’s M magazine du Monde and showed Macron in black and white over a white and red striped background. His jacket showed images of protesters at the Arc de Triomphe.

“We apologize to those who have been shocked by graphic intentions which obviously do not correspond to the reproaches addressed to us,” he wrote according to a Google Translate. “The elements used were referring to the graphics of the Russian Constructivists in the early XX th  century, which used black and red.”

As evidence, Le Monde included four other illustrations it has published with similar black and red imaging.

Then on Dec. 31,  Le Monde published an editorial from its director Jerome Fenoglio saying it received “numerous e-mails from readers expressing their disapproval, even outrage,” according to a Google Translate. iMediaEthics has written to Le Monde to ask if Macron himself complained.

“These messages show the same impression: the visual device used equate representation of President of the Republic, Emmanuel Macron, imaging dictators of the XX th  century, and especially to that used to Adolf Hitler,” the editorial continued. “This was obviously not our intention, as we indicated on Saturday, December 29th. Everyone knows, the world , what a gulf separates a President of the V th Republic of the vilest tyrants of the last century. No one would play to confuse a democrat and a Nazi. However, the unease created by this cover, even if other readers did not have the same interpretation, shows that its publication was a mistake.”