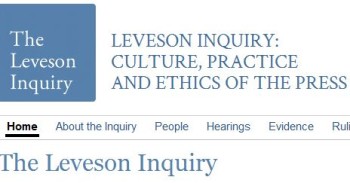 The Times of London‘s editor James Harding revealed during the Jan. 17 session of the Leveson Inquiry that one of its reporters used e-mail hacking to get a 2009 story, the Guardian reported.

Harding said that in response to the hacking, “the journalist faced disciplinary action. The reporter believed he was seeking to gain information in the public interest but we took the view he had fallen short of what was expected of a Times journalist. He was issued with a formal written warning for professional misconduct.”  The UK Telegraph added that “the reporter in question was later sacked over an unrelated matter.”

While Harding didn’t ID the reporter or story in question, the Guardian indicated the article in question identified “an anonymous police blogger called Nightjack.”

According to the Guardian, the reporter, Patrick Foster, explained that he hacked the account by having “guessed security questions.” The person whose account he hacked, Richard Horton, had tried to use an injunction “to protect his anonymity,” but lost, both the Guardian and Telegraph explained.

The Times’ sister paper, The Sunday Times’ editor John Witherow told the Leveson Inquiry that one of its employees posed as Gordon Brown “to obtain details about the former prime minister’s finances,” according to the UK Press Association.

The impersonation happened in 2000 and was to get “information from the bank” to learn about Brown’s recently purchased apartment.  Witherow confirmed that the Times staff member contacted the bank six times and that the person successfully got the information.

According to the Press Association, in July 2011, the Times ran an article defending any attempts to “access Brown’s mortgage information” as in the public interest.

Witherow also defended undercover reporting and “lying to an informant in order to get to the truth,” according to Journalism.co.uk.   Regardless of any impersonation, Witherow said he “draws the line at phone hacking.”  The UK Independent added that the newspaper has withheld from publishing information if there isn’t any “public interest in publishing.”

In early January, police revealed Brown’s e-mail may had been hacked, according to UPI.  The UK Independent noted that the hacking would have occurred “from 2005 to 2007.”