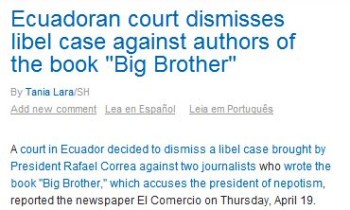 (Credit: Knight Center for Journalism in the Americas, screenshot)

The libel case against Ecuadorean journalists Juan Carlos Calderón and Christian Zurita was “dismisssed,” the Knight Center for Journalism in the Americas reported.    The journalists were convicted of libeling Ecuador’s president Rafael Correa with their book The Big Brother, which reported on Correa’s brother’s government contracts.

We wrote earlier this month when the Knight Center reported that despite Correa’s February pardon of the pair, a court chose to go “forward with the ruling.”  We wrote  in February about the ruling against Calderon and Zurita, as well as an Ecuadorean court’s ruling against El Universo journalists over a February 2011 column on Correa.