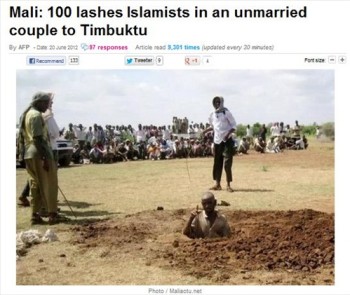 Mali news website Mali Jet ran an old photo from Somalia with its coverage of a recent whipping in Mali, France’s News 24 reported.

The photo shows a man who is chest-deep in a hole that is being circulated with reports on “a couple from the northern Malian city of Timbuktu receiving 100 lashes on Wednesday for having had a child out of wedlock.”

The couple was reportedly beaten by “Islamic group Ansar Dine (Defenders of Faith),” Agence France Presse wrote, based on information from “witnesses,” a “local official” Mohamed Ould Baby, “a hospital source,” and “an Islamic police official in the town.”

But, the photo Mali Jet used is a few years old and is from a separate incident in Somalia.  The series of photos of the same man being “buried in the ground” and “stoned…to death for adultery” by “Islamic militants” in Somalia were published on the Huffington Post years ago, News 24 noted.

News 24 reported that there is actual footage by Mali’s state television of the Timbuktu couple being whipped, “but that video has not yet been aired.”

We have written to Mali Jet asking if it will correct and will update with any response.  We wrote earlier this month when the Sunday Times used a doctored photo from 2008 with its 2012 coverage of Iran.