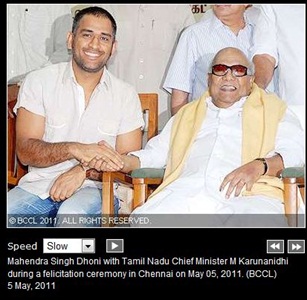 The Communist Party of India (Marxist) was accused by Indian politician M Karunanidhi of publishing “frivolous and mischievous reports” and fabricating “mischief,” Deccan Herald reported.  The CPI(M)’s comments were made in party-approved Thekkathir, according to the Hindu.

Karunanidhi is the chief minister of Indian state Tamil Nadu.  He called for the media to abide by media ethics codes.

Notably, his letter complaining about the media was released just after numerous articles about his daughter Kanimozhi went to court in relation to the 2G Spectrum case. According to Times of India, she has been “named in the CBI charge sheet” and may be arrested.