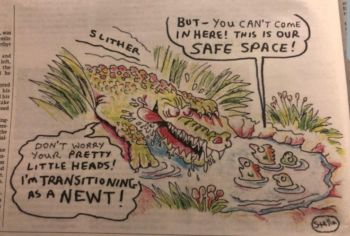 The UK Morning Star published a cartoon that ‘was offensive to trans people,” the newspaper itself admitted.

In a Feb. 23 apology, the Morning Star said “the cartoon had not been authorised for publication and its appearance in the print edition represents a failure to follow our own procedures for approving submissions.”

The cartoon was published Feb. 18 and unpublished from the online website the day of publication, the newspaper reported. iMediaEthics has written to the Morning Star.

“A notice was sent around to staff on Tuesday reminding them of the process by which cartoon submissions must be approved before publication and we are determined that such a lapse in standards will not recur,” the Morning Star continued. “Again, we apologise for the offence caused by this cartoon, especially to our trans contributors and readers whom we have let down.”

Pink News, an LGBT news site, published the cartoon, which showed a crocodile crawling into a pond. In response, four newts say, “But you can’t come in here, this is our safe space!” To that, the crocodile says “Don’t worry your pretty little heads! I’m transitioning as a newt.”

The Morning Star’s website says “we’re a reader-owned co-operative.” Its Facebook page says the newspaper is published six days a week and “is the only English-language socialist daily newspaper in the world.”