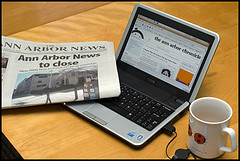 Is blogging the same as journalism? Is the value of news the same online as it is in a newspaper?(Credit: mfophotos, Flickr)

But does this change of self-definition even matter?

Jeremy Porter blogged about the study on Journalistics, a blog about journalism, public relations and social media.  Porter wrote that most bloggers shouldn’t be considered journalists.

Porter wrote that the dividing standards between blogging and journalism are quality, accuracy and authenticity.

PRWeek and PR Newswire announced the results of their study via an April 1 press release.  The survey polled  – in the U.S. and Canada – 1,568 traditional and non-traditional media as well as 1,670 people employed in public relations.

The press release wrote that “the objective of the study is to gauge the attitudes and ideas of traditional journalists and bloggers, as well as PR professionals, to gain an understanding of the present state of the media profession and the trends that are continuing to shape the industry.”

Joshua Brown also wrote  about the survey on Benzinga, a news site focused on global markets, that blogging and journalism “are absolutely not interchangeable – and that’s not a slight against either camp.”

Benzinga’s main argument differentiating the two is the level of responsibility a journalist has to the truth.

“Journalists are responsible for the originality and truthfulness of what they put out.  Bloggers may feel that they are and in many cases try even harder to maintain journalistic standards, but at the end of the day, they simply don’t have to.”

Another key area the study covered was the use of social media and blogs in research by bloggers and journalists.

91% of bloggers use other blogs and social media in their research, the study found.  Porter questioned whether that information being spread from site to site is reliable.

The study also found  64% of bloggers and 36% of online reporters use Twitter for research compared to 19% of newspaper reporters and 17% of print magazine reporters.

Are other blogs and social media reliable sources? How much substantive reporting can be drawn from a 140-character or less tweet?

But, Porter wrote that treatment of blogs as sources is part of the reason that so much misinformation is spread.  After all, as Porter questioned, “how many degrees from the source of the information is the post you’re reading?”

Just a week before the study was released, Joe Wilcox was writing on Oddly Together that  bloggers who want to be journalists have to adopt journalistic standards of accuracy, accountability and sourcing.

Wilcox wrote, “One rampant problem: The increasing number of unnamed single-sourced blog posts or news stories that seemingly countless other blogs link to. Gossip and rumor runs amok masked as news. Let me be clear: Just because everybody is saying some true doesn’t make it that way. It’s my observation that most rumor posts remain uncorrected when later proved to be wrong.”

In the PRWeek/PR Newswire press release about the study, PRWeek executive editor Erica Iacono said, “Heavier workloads, shorter deadlines, and increased competition are causing journalists to seek out new sources of information to help them get their jobs done, including social networks.  Although these new tools offer a different way for journalists to interact with PR professionals and media consumers, there must still be a focus on the basic tenets of good journalism.”

While many journalists abide by the Society of Professional Journalists’ code of ethics, there is no official code for blogging.   A 2003 proposed code of ethics for bloggers on Cyber Journalist is modeled after the SPJ code.  The Media Bloggers Association, founded in 2004, likewise encourages its members adhere to standards of honesty, fairness, accuracy, transparency, accountability, trust, and respect for privacy.

Dave Parrack offered April 2 on Tech Blorge, a technology news site, a compromise in the blogging versus journalism debate – that precise labeling isn’t important because both are writers. “What I think we can all agree on is that we’re writers. Whether online or off, we write, sometimes for money, sometimes for pleasure, and always to produce interesting articles intended to appeal to as many people as possible.”

Is there an accountability standard for bloggers?  Just look to The New York Times’s coverage of ACORN to see how well readers react to a newspaper not running a correction that readers think is necessary. Readers and watchdog groups have written countless letters to the editor, e-mails, comments, blog posts and articles complaining about The New York Times‘ coverage of ACORN.

Have any blogs received the same overwhelming push to correct a false story, rumor, or bad fact?  Or, are blogger errors just dismissed because the site is not a mainstream media journalistic entity?  Web sites like Gossip Cop do “police the gossip industry” and call out fake or misleading stories on blogs and Web sites.  Should there be more similiarly targeting bloggers errors?