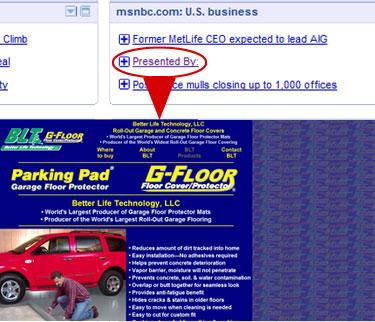 The news headline links at MSNBC.com lead to ads on my iGoogle page.Yesterday's ads linked from "Presented By" included a Sen. Gillibrand campaign ad about "dont' ask, don't tell" policy and the one above, about flooring.

When I click on MSNBC U.S. business news headlines, I don’t expect an ad for New York Senator Gillibrand’s campaign highlighting her support of repealing the “Don’t ask, Don’t tell” military policy to appear. But that is what I got. Here is my iGoogle page and the issue-oriented Gillibrand ad that appeared yesterday even after hearing from a MSNBC.com rep that they would get back to me.

Since last week, I have been waiting  for MSNBC.com to explain why the news headline links at MSNBC on my iGoogle page lead to advertising instead of MSNBC news stories. See yesterday’s post. A representative from Google explained yesterday that these headlines are under MSNBC control and are generated from their gadget.

The garage flooring protection ad depicted above appeared when I clicked on MSNBC.com U.S.Business news headlines on my iGoogle page. Just now, I looked again and an ad for HP printer ink appears. See screen capture.

I only added MSNBC.com, the number one news site, to follow their news headlines. So why do ads appear when I click on one of the three headlines that appear under “MSNBC.com U.S. business”?

I will update this post as information comes in….