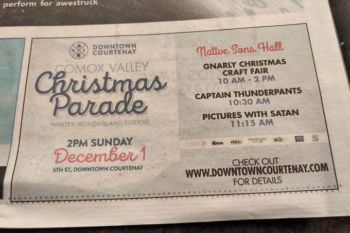 The Comox Valley Record published an ad saying Satan was coming to visit for photos. But, it was, thankfully, a typo, as Santa was the guest.

In a Nov. 22 editorial, the newspaper in British Columbia apologized for its “unfortunate typo.”

“Photos of the ad were being shared far and wide on social media, with the newspaper rightfully being called out for its lack of attention to detail,” the Comox Valley Record wrote. “There is no excuse for it, and we aren’t about to use this space to make any. The same number of eyes proofed the ad as with anything that runs through the advertising and production departments.”

The newspaper apologized to readers and the advertiser.

“As a newspaper, it is our responsibility to make sure the information we distribute is accurate – from the editorial department, as well as the advertising department,” the newspaper continued.

iMediaEthics has contacted the paper to ask how many readers complained.