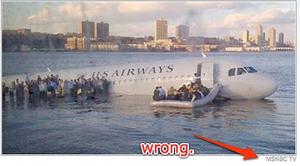 Note the credit lines states MSNBC...but it's not their photo! Flickr user, Melanie Phung commented,"There's no excuse for sloppy reporting. It's bad enough when small publishers (e.g., bloggers) 'accidentally' forget to attribute, but a news source like MSNBC knows and can do better." Photo illustration by Imajes (Great catch.)

A photo of the US Airways jet that crashed into the Hudson River should make citizen journalists think twice about ‘terms of use’ contracts on websites like MSNBC.

The Hudson River plane crash photo was first posted on Twitter by user ‘jkrums’ – Janis Krums of Florida – but quickly reappeared across the web. Krums was on a ferry going to rescue people when he posted the photo. Flickr user natekoechley posted the picture with a clear disclosure that it was not his, and therefore not his to distribute. “This photo was Posted on January 15, 2009 by jkrums to twitpic.com/135xa. It is not my photo. Twitpic was down under the traffic so I put it here as a mirror,” he wrote.

Natekoechley was even contacted by other media outlets asking for permission to use the photo. In his post, he said, “Wow, just got an email from Good Morning America looking to use this photo. Of course it’s not my photo to give – I just wanted to help post a mirror since Twitpic was down — but I pointed them to @jkrums (who I bet is still on the river in the ferry!)”

Not every media outlet bothered to check before using the photo. MSNBC.com posted it and attributed it to its very own MSNBC-TV. (hat tip: Imajes). It seems someone at MSNBC was confused, thinking this was material posted directly to MSNBC. Wrong! If Krums would have posted it to MSNBC instead of Twitter, only then would MSNBC able to claim ‘license to MSNBC.’ Anytime one posts content under their uReporter program…watch out for the fine print !. StinkyJournalism’s recent report pointed out that the “terms of use” that one agrees to when posting content to MSNBC states: “you are granting MSNBC a royalty-free, perpetual, non-exclusive, unrestricted, worldwide license to: Use, copy, sublicense, adapt, transmit, publicly perform or display any such communication.”

Krums was interviewed on MSNBC within an hour of posting his photo, so clearly the network knew it was his. Someone at MSNBC.com must have assumed MSNBC got it before Krums posted it to Twitter, and treated his photo as MSNBC treats other citizen journalist content and just claimed it as their own. MSNBC’s uReport program is among those from mainstream media outlets (like FOX News) that have included this ability to call your stuff their own in the fine print of their contracts. This case of the Hudson River photo offers an important lesson for citizen journalists. If you upload to most all mainstream media sites you can not only loose your rights, but mainstream media can freely sell your photo , take credit and not give you a dime.

The problem here for MSNBC is that the now famous photo wasn’t uploaded to their uReport program! It was posted on Twitter, which gives everyone free access. MSNBC in this case has no rights to claim attribution. Someone at MSNBC clearly needs to do better checking to make sure the citizen journalist photos they are claiming are theirs are, well, in fact, their property.

In looking through comments on this story, I saw that bloggers noted that other websites also falsely attributed this story to others. Flickr user RachelC commented, “It’s been used elsewhere without proper attribution – Silicon Valley Insider published it correctly, then Consumerist grabbed it off them and credited SAI. All a mess.”