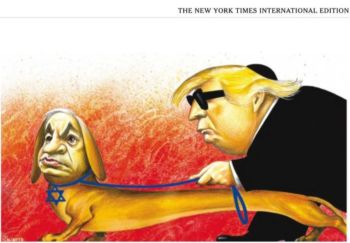 In a statement posted on Twitter, the Times said it deleted the cartoon and it was published in the international print edition April 25. New York Times spokeswoman Danielle Rhoades Ha pointed to the editor’s note and told iMediaEthics by email: “The cartoon appeared in the print New York Times International edition. It did not appear online or in any other print edition.”

The editor’s note will be published in the April 29 international edition, according to a Times tweet which reads:

“A political cartoon in the international print edition of The New York Times on Thursday included anti-Semitic tropes, depicting the prime minister of Israel as a guide dog with a Star of David collar leading the president of the United States, shown wearing a skullcap. The image was offensive, and it was an error of judgment to publish it. It was provided by the New York Times News Service and Syndicate, which has since deleted it.”