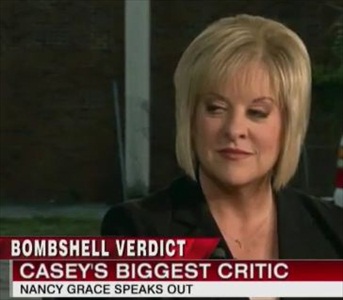 CNN-owned Headline News anchor Nancy Grace stated that her highly emotional coverage of the trial of 25-year-old Casey Anthony, who was charged in 2008 of murdering her daughter, was not motivated by “ratings incentives,” according to Mediaite.  After Anthony was found not guilty in the death of her daughter, Grace commented on Headline News that “Somewhere out there, the devil is dancing tonight.”

In a July 7 interview with Broadcasting & Cable, Grace addressed her critics by saying, “I suggest if they don’t like my coverage then don’t watch it.”  The New York Daily News, for example, criticized Grace in a July 5 article claiming that Grace “convicted [Anthony] of killing her daughter from day one.”

Broadcasting & Cable’s Andrea Morabito asked Grace, “How do you think you handled the verdict on air – you happy with your performance?” Grace responded that she did not consider her reaction a “performance” and that it constituted “stunned disbelief.”

Mediaite questioned “whether an analyst’s ‘stunned disbelief’ and other highly personal, emotional reactions should constitute such a major part of his or her news coverage.” They noted, “From a ratings perspective, the answer is an obvious and overwhelming ‘YES!’”  A reported 5 million people tuned in to HLN to watch the verdict of the trial, according to Mediaite.

CNN’s “Reliable Sources” hosted a July 10 discussion on the role of “legal pundits” in covering the Anthony trial, Mediaite added. Broadcast journalist and program panelist Diane Dimond pointed out that some people who commented on the Anthony trial in the media such as Nancy Grace were “not really qualified to talk about a case like this” because they are not “trained journalists.”