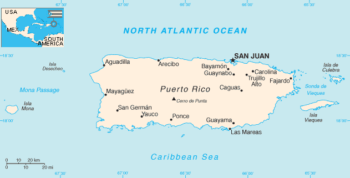 Puerto Rico is part of the United States as a commonwealth with its members having U.S. citizenship. After Hurricane Maria devastated the island, the news media might need a reminder of that fact.

“Correction: This post originally referred to Puerto Rico as an ‘island nation’ when it is a part of the United States. We apologize for the error.”

The article only has one comment on it, which flags the error. “FlatIronMan” wrote, “Puerto Rico is not a country.”

iMediaEthics has written to Engadget associate editor Timothy J. Seppala to ask how long the error was published and how it happened.

Endadget wasn’t alone. The New York Daily News suggested that Puerto Rico isn’t part of the United States with its Sept. 26 story, “Pitbull sends private plane to rescue cancer patients in PR.” The Daily News article reads in part, “The American rapper known as Pitbull is sending his private plane to Puerto Rico so that cancer patients can receive treatment in the United States.”

Was it an error that the Daily News thought Puerto Rico wasn’t part of the United States, or was it imprecise writing and editing in failing to distinguish that the patients were headed to mainland U.S? iMediaEthics wrote to the Daily News‘ Megan Cerullo to ask this and find out if the newspaper will update its story to clarify.

Readers tweeted in response pointing out that Puerto Rico is part of the U.S. One, @Elissa_Malcohn, wrote, “@NYDailyNews please say ‘mainland US’ in your article; you have room there. PR is part of US.”

Cerullo told iMediaEthics, “Thank you for flagging! I hadn’t read Twitter comments but yes, that was an error on my part. Will correct now.”

Pitbull is sending his private plane to Puerto Rico so that cancer patients can receive treatment in the U.S. https://t.co/tCFewgKkIf pic.twitter.com/XQB34XWWiL