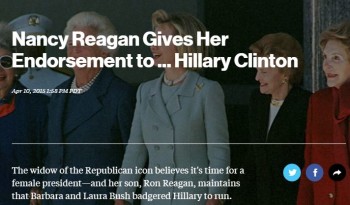 Screenshot of Bloomberg's story based on a satire report (Credit: Bloomberg, screenshot)

Bloomberg Politics fell for a hoax story saying Nancy Reagan is backing Hillary Clinton in her bid for the Presidency in 2016.

While Politico reported that the story’s link goes to a retraction posted above the original false story, when iMediaEtics viewed the link shortly after 8 PM, it goes to an error page. The URL for the story now reads that the story was retracted. According to Politico, the story was “deleted within minutes” of publication.

It was based on a satire story from site the National Report.

However, iMediaEthics read the article on Bloomberg Politics via a Google cache and the story didn’t link to any source for the Reagan/Clinton claims and only had one mention of attribution by means of “an interview, quoted in the Drudge Report.”

iMediaEthics asked Bloomberg about a correction or retraction, the lack of clear sourcing in the original article and what fact checking measures it took before publication.

Bloomberg Politics responded to iMediaEthics by e-mail: “We fell for a hoax. As soon as we realized our error, we issued a retraction. We apologize to our readers.”

The National Report story claimed Ronald Reagan’s son Ron Reagan showed clips of an interview with his mother “during a promotional press conference for The History Channel’s upcoming series ‘First Ladies in Their Own Words.'” In the purported video clip Nancy Reagan reportedly said she backed Hillary Clinton and spoke positively of her.

National Report’s satire story further claimed Reagan said in an unaired History Channel program “The time for a woman to serve as our President has come – really, now is the time – and I think the idea of having a former First Lady as the leader of the free world is really quite a marvelous notion. I want Hillary to win. Even though I admire two of the current potential Republican nominees, I have no interest in seeing either of them lead this country.”

@moneyries @jonswaine very very stupid mistake, and one we take very seriously. simple as that.