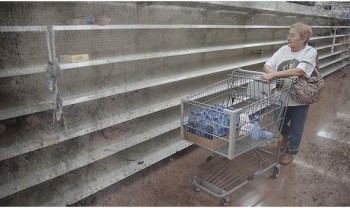 Above see the Texas 2005 photo the National Review used -- then deleted -- with the article on Venezuela in 2015.

The National Review used a photo from a 2005 Texas hurricane to accompany a story on Venezuela and Sen. Bernie Sanders, Mediaite reported.

The National Review‘s May 27 story was titled “Ask Venezuelans How Sanders-Style Socialism Is Working Out for Them,” by Michelle Malkin.

The story originally included a photo of a woman with a shopping cart walking through a store with empty shelves. But the picture wasn’t from Venezuela. It was actually from Texas 10 years ago.

The National Review has added this correction:

“CORRECTION: This column originally was illustrated by a photo that was erroneously identified as empty store shelves in Venezuela. We apologize for the error.”

Malkin, the author of the National Review article, distanced herself from the photo choice, tweeting for National Review to fix the image because the error “smeared” her, Mediaite reported.

National Review‘s editor Rich Lowry confirmed the error was “entirely our mistake” and not Malkin’s.  “Our image editor grabbed the photo without verifying its source,” Lowry noted.

“Michelle has been getting criticized as if she had anything to do with this snafu, but obviously syndicated columnists do not pick the art that goes with their columns in the various outlets that run them,” he noted.

Lowry also remarked that despite the photo error, “Of course, there is no lack of genuine photos of empty store shelves in Venezuela.”

Lowry added in a statement on the National Review‘s website that its image editor altered the photo to give it “an added weathered look…for effect.” Little Green Footballs said that English-language signs were also cropped out.

iMediaEthics asked if the alteration was disclosed to readers and if it was correct that English signs were removed. Lowry pointed iMediaEthics to his statement on the website and said the use of the inaccurate photo was “an honest mistake.”