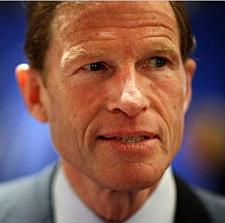 Starting May 17, The New York Times has published several articles and a 58-second video to call Richard Blumenthal out for misrepresenting himself as having served in Vietnam.

The nut of The Times’s evidence was the 58-second video in which Blumenthal, Connecticut’s Attorney General who is running for the U.S. Senate, said he served in Vietnam.  Blumenthal didn’t serve in Vietnam, but he did serve during the Vietnam era, which he also said in the same video.

But, after The Associated Press revealed this fact–that a longer version of that video also shows Blumenthal accurately describing his involvement in the service–some media outlets and ethicists cried foul and questioned The New York Times’s reporting.

Blumenthal is the attorney general for Connecticut.  During the Vietnam War era, he had five military deferments, and then enlisted in the U.S. Marine Reserve, where he served for six years.  He was never sent overseas to Vietnam, but he did serve during that time period.

The New York Times published an article May 17 accusing Blumenthal of misrepresenting his military service.

Along with the 58-second video, the article listed several other instances in which Blumenthal said he served in Vietnam.

The Times also published a May 18 editorial wondering if his “embellishments” constituted a “disqualifying character trait.”

On May 18, The New York Times reported that Blumenthal had taken “full responsibility” for misspeaking.

The Huffington Post wrote May 20 that the Times is wrong to think it’s a non-issue.  The Times’ public editor Clark Hoyt wrote in his May 23 column that The New York Times’ executive editor Bill Keller said the newspaper had a DVD of the entire speech, which it ensured wasn’t doctored.  Regarding the part of the video which was edited out of The New York Times‘ published version where Blumenthal says he served during Vietnam, Hoyt wrote that even that wasn’t perfect on Blumenthal’s part:  “he left out a crucial word: Reserve,” Hoyt wrote.

While Washington Post’s Greg Sargent said that Blumenthal has erred in his misleading or giving false impressions, “the 2008 speech is by far the single most damning piece of evidence against Blumenthal.”

In his May 23 column, Hoyt, agreed, calling the video the “strongest evidence.”  Hoyt wrote that “the full video should have been posted,” and that The New York Times should have sourced it as well.

Sargent wrote that “there’s no conceivable reason for leaving out the fuller context and letting readers make the call for themselves.  It seems obvious that when dealing with a story this explosive, you would want to err on the side of more context, rather than less.”

The longer version of the video shows Blumenthal accurately state that he served during Vietnam, not in Vietnam.

The Atlantic Wire reported May 20 that a Times spokesperson said  that “the longer video does not change the story about a ‘long and well-established pattern of misleading his constituents about his Vietnam War service.”

Colin McEnroe blogged on The Hartford Courant that the article “seemed like weak journalism with very little meat on its bones. There was one ‘smoking gun’ — the Norwalk clip. The rest of the story relied heavily on implication and suggestion and the vague claim that the idea of Blumenthal’s service in Vietnam was a widely accepted part of his ‘public biography.'”

And now that The Times’ one “smoking gun” is apparently not so smoking, wasThe New York Times wrong in its reporting?

Columbia Journalism Review wrote May 19 that  The Times did have a story to report, but “by overselling it,” the newspaper has done “everyone a disservice.”

CJR also wrote that The Times should have contextualized the video.

Markos Moulitsas Zuniga, founder and publisher of The Daily Kos, wrote May 19 that it “trusted the NY Times to get the story right, and believed the paper when it claimed Blumenthal had a history of misrepresenting his service history. As a veteran, it pissed me off.  Now I’m pissed at the NY Times for not properly doing its job, and denying its readers the available information necessary for its readers to properly assess the situation.”  Zuniga’s posting indicates a regret for trusting The New York Times.

New York Times spokesperson Diane McNulty wrote in an e-mail to Greg Sargent, which he published on The Washington Post’s The Plum Line May 19 at 4:20 PM EST that:

“The New York Times in its reporting uncovered Mr. Blumenthal’s long and well established pattern of misleading his constituents about his Vietnam War service, which he acknowledged in an interview with The Times. Mr. Blumenthal needs to be candid with his constituents about whether he went to Vietnam or not, since his official military records clearly indicate he did not.

“The video doesn’t change our story. Saying that he served ‘during Vietnam’ doesn’t indicate one way or the other whether he went to Vietnam.”

Blumenthal’s opponent, Linda McMahon, has said she provided information to the Times.  The New York Times reported May 18  that her claims for credit are “apparently in a bid to impress Republican delegates that her resources would give her the greatest chance of defeating Mr. Blumenthal, who had seemed invincible.”

Salon wrote May 19 that it’s “politically, dumb” and possibly not even true for McMahon to take credit.

“Considering the very public acknowledgment from Blumenthal’s opponent, Linda McMahon, that she had helped with the research for the Times piece, questions arose about whether the paper had handled the reporting process fairly,” The Huffington Post reported.

NECN reported May 20 that McMahon said May 19 “Look guys, let me just say I’m not going to get caught up in the process of what was done yesterday,” she said.  “We had done some research, we shared some research — it was a good project and let’s move on.””

McEnroe wrote that The New York Times has to “resolve the discrepancy between the claim by the Linda McMahon campaign that they are the source of the Times story and Hernandez’s repeated denials that this is true. It’s an odd situation: to have someone claiming to be a journalistic source while the reporter tries to avoid talking about it. It usually cuts the other way.”

In Hoyt’s public editor column May 23, Hoyt wrote that The Times’ executive editor Bill Keller said McMahon’s campaign didn’t feed the story to the newspaper and that the newspaper did do “extensive independent reporting” including filing a FOIA for Blumenthal’s military records and conducting interviews and reserach.

Hoyt reported Keller said “The idea that the story originated or was sold to us by the McMahon campaign is just plain false…We did not rely on that material.”  So The New York Times got the video, but didn’t rely on it.

Jean Risley, chairperson of the Connecticut Vietnam Veterans Memorial, says she was misquoted in the original article.  In that article, Hernandez wrote:

“‘It was a sad moment,’ (Risley) recalled. ‘He said, “When we came back, we were spat on; we couldn’t wear our uniforms.” It looked like he was sad to me when he said it.’

“Ms. Risley later telephoned the reporter to say she had checked into Mr. Blumenthal’s military background and learned that he had not, in fact, served in Vietnam.”

Hoyt wrote that Risley did tell the reporter, Raymond Hernandez, that “Blumenthal was a Vietnam veteran, but said she immediately realized her error and called him back to correct it.  Hernandez stood by the version of their conversation reported in the article.”

Is The New York Times out to get Blumenthal?  A May 20 article reads:  “There, he could learn a thing or two about that war from men who actually fought it — unlike Mr. Blumenthal, who has on occasion claimed to have been there, though the closest he may have gotten to a Vietnam experience is at Saigon Kitchen in Hartford.”

J. Bradford DeLong blogged that it was a hit piece, as did Connecticut’s TheDay.com.  Media Matters asked May 18 if The Times is “giving Blumenthal a raw deal.”

Since McMahon is taking credit for feeding information to The Times, The Huffington Post wrote May 20 that The Times’ reporting “should have been extensive and independent.” HuffPost concluded The Times‘ video is an edit.