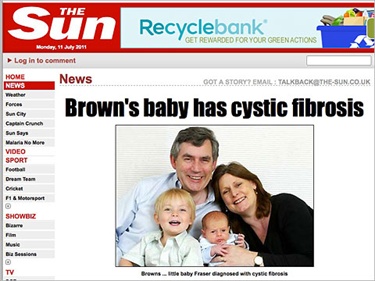 The Sun reportedly hacked into British Prime Minister Gordon Brown's phone to report the above story about Brown's son. (Credit: The Sun via the NY Times, screenshot) pirate bay, limewire

The Associated Press reported that “a group of News Corp. shareholders” have filed a lawsuit against News Corp. claiming the company made “large-scale governance failures” in light of the News of the World’s phone hacking scandal.

According to the AP, the shareholders behind the lawsuit “own less than 1 percent of News Corp.’s stock combined.”

News of the World also reportedly hacked into the voicemails of “five senior police investigators” who were looking into the phone hacking allegations against News of the World in 2006, the New York Times reported.

The Times suggested the investigators may have been coerced into a soft investigation into the hacking charges because of fear of retaliation by the newspaper with possible “splashy stories about their secrets.”

Two of those five investigators did end up having “several damaging allegations” reported on by “other news outlets,” the Times noted. One of them, Andy Hayman, stepped down from his post in late 2007 following one of those reports by Channel 4 News.

The news report was based on “400 text messages and phone calls” Haymen sent to a woman from the Independent Police Complaints Commission, according to the Times.

News International journalists from Murdoch-owned newspapers the Sunday Times and the Sun may have also tried to hack Gordon Brown’s voicemail, bank account, “legal file” and medical records, CNN and The Guardian reported. News International  reportedly focused on Brown, former UK prime minister, for “a period of more than 10 years.”

The revelations are evidence that the phone hacking scandal isn’t limited to News of the World.

While “some of the activity clearly was illegal, other incidents breached his privacy, but not the law,” according to The Guardian.

The Sun had reported about Brown’s “seriously ill son” and the Sunday Times “tricked Brown’s accountants into handing over financial details.”  Brown hasn’t made a public statement on the claims; rather, CNN is sourcing its report to “a source close to Brown.”

In response to the claims, News International requested “all information concerning these allegations.”

Were Prince Charles and Camilla Hacked?

The Guardian reported that News of the World may have also hacked the voicemails of Prince Charles and his wife Camilla.  The Guardian cited “police records” that list the two with “at least 10 members of the royal household who have now been warned they were targeted for hacking.”

Goodman and Coulson were both arrested last week in relation to the new allegations of phone hacking at News of the World. Coulson resigned earlier this year from his post as communications director for prime minister David Cameron amidst questions of his involvement and knowledge of the phone hacking.

Cameron reportedly commented that he would be “incredibly angry and incredibly let down” if it turned out Coulson lied about not knowing about the phone hacking.

The Catholic Herald reported that Vatican newspaper L’Osservatore Romano editorialized on the hacking and called for better ethics in “the media industry and in general culture.”

The editorial, by Fr Jose Maria Gil Tamayo,  commented that journalism is a “victim” in this case because the hacking scandal “takes away the prestige and credibility of journalism which is essential to free and democratic societies.” The editorial called for “greater ethical consideration in the media, which cannot only submit to the dictates of economic and political strategies.”

CNN reported that News International announced it “was withdrawing its plan to sell television channel Sky News as part of its acquisition of BSkyB pending further consideration of the bid.”

But, The Independent’s Toby Young commented that News Corp’s BSkyB bid is “dead in the water.”  Young questioned if News Corp would “decide to sell off News International” to get rid of the scandal.

The Los Angeles Times reported that the UK’s deputy Prime Minister, Nick Clegg,”became the highest-ranking member of the government to call on Murdoch, who is currently in London to deal with the scandal, to withdraw News Corp’s bid for BSkyB altogether.”

The July 4 reports that News of the World hacked the phone of Milly Dowler, a teenager who went missing and later found murdered in 2002, started a chain of events and revelations that led to News of the World’s closure this past weekend.

In the Dowler case, News of the World reportedly hacked into Dowler’s voicemails in the days after she first went missing and even deleted some of the messages left for the teenager to make room for new messages.  As a result, her parents had “false hope” that their daughter was still alive.

CNN reported that Dowler’s family confirmed that Murdoch “has not apologized” for the hacking.

Mark Lewis, the attorney for the Dowler family, commented to CNN that News International CEO Rebekah Brooks “should  take editorial responsibility” for the hacking and resign.  Brooks was the editor of News of the World when Dowler’s phone was hacked.  News Corp’s Rupert Murdoch, however, has ignored calls for Brooks’ resignation or termination and defended her.

Meanwhile, the UK police criticized the Evening Standard, which is not owned by Murdoch’s News Corp, for engaging in a “‘deliberate campaign’ to undermine the investigation” into alleged police bribery by News of the World, Journalism.co.uk reported.

Specifically, the police allege that Evening Standard’s report “Queen’s police sold her details to the News of the World” could affect the investigation. That article reported that “corrupt royal protection officers” sold News of the World information about and phone numbers for the Queen and her “close aides.”

The police stated that it is “extremely concerned and disappointed that the continuous release of selected information — that is only known by a small number of people — could have   a significant impact on the  corruption investigation.”