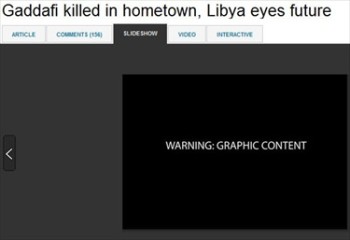 The Associated Press, Agence France-Presse, and Reuters all decided to put photos of Muammar Gaddafi’s death on their wires, Poynter’s Bob Andelman reported.

AFP explained its photo came from its photographer Philippe Desmazes’ picture of an “anti-Kadhafi fighter’s” cell phone video.  The AFP’s Florence Biedermann responded to iMediaEthics’ e-mail inquiry asking about the AFP’s decision to publish the graphic photos and how the wire service authenticated the footage by including the AFP’s story on how the AFP “got the first picture.”   She told StinkyJournalism via e-mail that

“Our photographer is an experienced journalist and we trust him 100% regarding the authenticity of the image. As to the decision to publish it, it was simply impossible not to, although it is a shocking picture, as it is an essential piece of news, part of an historic event.”

According to the AFP’s story, Desmazes explained that “his lucky break” in getting the images was “when he noticed another group of fighters nearby, eyes fixed on a mobile phone and decided to join them.” Read the full AFP story here.

The AP’s Paul Colford explained that its pictures were “from video screengrabs provided by Al Jazeera and Al Arabiya, as Poynter wrote.  The wire service was “very careful to use only stuff we’ve vetted and feel comfortable about.”

Colford also is quoted as telling Andelman that the images are “pretty graphic stuff” and “pretty grim photos.”

The BBC defended publishing the video of Gaddafi “in his dying moments,” the Guardian noted.  The BBC’s Mary Hockaday wrote on the BBC’s editor’s blog that the BBC made “checks” of information and images that the network received and that it tried to “be very clear with our audiences what we’d been able to verify and what we hadn’t.”  Further, she noted that even though the footage was “very graphic,” the network “judged that it was right to use some footage and stills, with warnings about their nature.”

Hockaday argued that by showing the images, the BBC was able to prove that he had in fact died.  Further, she noted that the BBC didn’t air every bit of footage it obtained.  Read her full post here.

In a Poynter-hosted chat about the images, Poynter’s Al Tompkins questioned the video’s origins as well as why “the video seems to be sped up.”  Tompkins also commented on the New York Times’ publication of the photo in a slideshow that includes a page with a “warning” about the graphic nature of the images before you see the photo.

Some sites like the UK Metro included distancing language with the image, noting “The image circulated shortly after his capture appears to show a bloodied Gaddafi being hauled up by rebels.  Mediaite noted that CNN aired graphic video from Al Jazeera showing Gaddafi’s dead body.

TIME‘s James Poniewozik questioned “did you need to see Gaddafi’s corpse?”, noting that even though photos were published (and widely available), there are questions about the “purpose” of publishing the photos and potential responses to the graphic images.

iMediaEthics has written to the Associated Press asking for more information about why they decided to publish the photo and how thy verified its authenticity. We will update with any response.