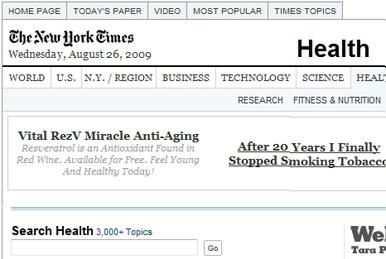 StinkyJournalism reported to The Times that the above banner ad--citing the virtues of resveratrol--appeared in The New York Times Health section even after they banned all such ads. The Times has acted ethically by taking immediate action to remove the ad from their Web pages. The ad deceptively claims the "free" pills will "Slow down your aging process, extend your life..."

Some fake ads riddling The New York Times are down, again…thanks to the Times’ continuing efforts and ethical response to our complaints.

imediaethics was promised last week by a Times‘ spokeperson that they would “prevent unacceptable products (like Resveratrol)” from appearing in the Times. Yet after a successful takedown of the bad ads from Google “Sponsored links” and Ad Network sections, we again spotted more flim-flam–in a banner ad for Resveratrol. This evidence lay on its online Health Section home page. The ad deceptively claims the “free” pills will “Slow down your aging process, extend your life…” Virtually the entire wording and baiting raises red flags and any media outlet hosting the ad would be in gross dereliction of FTC guidelines.

In prior e-mail exchanges, we were told that as far back as July 2009, The New York Times’ was already policing its pages (print/online) to prevent the posting of these Resveratrol snake oil ads. Abbe Serphos, Director of Public Relations for the Times, wrote that the paper “rejected an advertisement by Resveratrol in July due to its unfounded claims.” Our feature story: “New York Times: Profiting From Deceptive Ads They Decry” revealed a Times article “With Resveratrol, Buyer Beware” [August 18]  that targeted scam Resveratrol advertising, posted a Resveratrol display ad right next to the report. The bottle of  anti-aging pills promised a bogus possibility of living “150 years”. Clearly the Times, profiting from these ads while criticizing them, was a conflict-of-interest. The ads are iin direct violation of Federal Trade Commission Guidlines that protects citizens from false promises included in deceptive and misleading advertising.

“We will discuss with Google and their AdSense for Publishers team how we can prevent unacceptable products (like Resveratrol) from getting on the site via the text ad program. At the same time, we will work with our Ad Network associates to determine which network violated our terms in multiple ways: by accepting ads from products we don’t allow (i.e. Resveratrol), but also by deploying targeting technology that resulted in the ad being positioned opposite highly relevant content.”

But days later (Aug 26) we found the above resveratrol banner ad living on The NY Times’ Health Section homepage. The ad for Vital RezV  is selling the “Miracle Anti-Aging” antioxidant resveratrol riding off of “60 Minutes” Morley Safer’s coverage on the grape-derived product’s power.

Again we contacted Ms. Serphos about this most recent ad on their Health section page. The ad was pulled and the following day Ms. Serphos wrote back, “We continue to monitor the site for ads that violate our acceptability standards, and we will work with our ad network colleagues to make sure they are equally compliant with our policies. This is an ongoing effort.”

As far as we can tell, The New York Times has succeeded in finally blocking Resveratrol ads. We cheer their efforts.