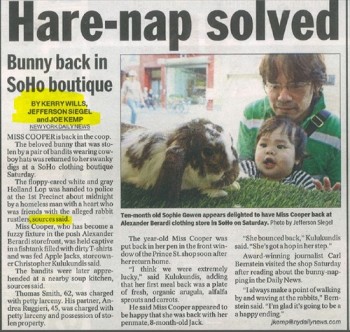 The story’s byline carried three names and reported on a kidnapping. Citing the vague “sources,” the Daily News went on to report how the captive kidnap victim was safely returned to the NYPD’s 1st Precinct.

The story, “Hare-Nap Solved,” reported on a kidnapped…rabbit. The furry victim normally lives in a SoHo boutique.

In this age of frequent newsroom cutbacks and layoffs to save cash, iMediaEthics was surprised to see three Daily News employees devoted valuable time to tracking down the whereabouts and return of a rabbit.  For context, in November, the Daily News laid off a reported 16 employees, according to the New York Observer.

We wrote to the Daily News‘ Joe Kemp, whose name was one of the three in the story’s byline, asking why the resources of three staff were used for an article on a rabbit.

We also asked about the rabbit story’s use of anonymous “sources.”

We haven’t heard back yet, but will update with any response.

The story doesn’t appear to be online, but see the above picture of the print edition.