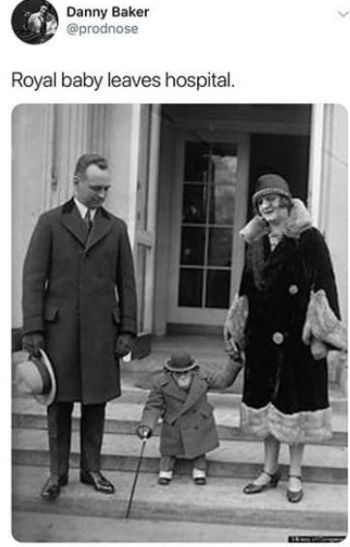 Prince Harry and Meghan Markle had their first child, Archie, this week; yesterday, the couple and baby appeared before the press.

iMediaEthics wrote to the BBC to ask if Prince Harry or Meghan Markle complained over the tweet. A BBC spokesperson told iMediaEthics, “This was a serious error of judgment and goes against the values we as a station aim to embody. Danny’s a brilliant broadcaster but will no longer be presenting a weekly show with us.”

Baker confirmed he was fired in tweets, adding, “The call to fire me from @bbc5live was a masterclass of pompous faux-gravity. Took a tone that said I actually meant that ridiculous tweet and the BBC must uphold blah blah blah. Literally threw me under the bus. Could hear the suits knees knocking “

Baker also tweeted that reporters from Sky and the Mail asked him about the picture, and his response was “No mate. Gag pic. Posh baby chimp. Alerted to circs. Appalled. Deleted. Apologised.” He called it a “funny image (though not of course in that context,” an “enormous mistake” and “grotesque.”