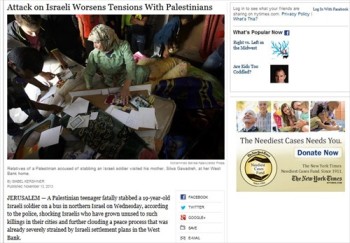 A screenshot of the top of the NYT article and photo in question. (Credit: NYT, screenshot)

The New York Times admitted it shouldn’t have used a picture of a Palestinian mother with a story about the death of a recently killed Israeli soldier, Eden Atias, and the recent tensions and negotiations between Israelis and Palestinians. Atias was killed by the 16-year-old son of the woman featured in the photograph.

Times public editor Margaret Sullivan responded in a blogpost to “hundreds” of e-mailed complaints about the photo. It  accompanied a Nov. 13 story about the Palestinian woman’s son stabbing Atias. Her son reportedly confessed to the stabbing.

The article, headlined “Attack on Israeli Worsens Tensions with Palestinians,” and reported on Atias’s death and Israeli-Palestinian negotiations.

Readers complained because it emphasized the mother of the killer, not the victim, and therefore suggested bias at the Times, Sullivan explained. She wrote:

According to Sullivan, both Times foreign editor Joseph Kahn and  assistant managing editor for photography Michele McNally agreed, according to Sullivan, that the photo failed to appropriately illustate the story. She qutoes McNally as acknowledging that the “essence” of the report was missed by the original choice of an illustration. “This did not represent the essence of the story, which was clearly the moment of the Israeli soldier being stabbed,” she said.

Similarly, Kahn confessed apologetically that “we don’t always get it right.”

The Committee for Accuracy in Middle East Reporting in America (CAMERA) pointed out in an article that it was one of the many who filed a complaint.  CAMERA used this incident to flag that the photo error wasn’t just a one-off but rather part of a larger, ongoing “pattern” of what it claimed is anti-Israel reporting.

As evidence, it pointed to CAMERA senior analyst Ricki Hollander’s Oct. 28 report for the Times of Israel, which chronicled cases that the New York Times has referred to Israeli politicians “shrill,” “strident,” “stubborn,”  “abrasive,” “derisive,” and “cynical” in news stories.

Both CAMERA and newspaper Israel Hayom noted that despite the Times‘ apology, the photo remains published.

iMediaEthics wrote to Sullivan asking why the photo is still published given the complaints. She directed our question to Times spokesperson Eileen Murphy. “It’s not my practice to comment for publication, on specific issues, other than in my blog posts and columns,” she wrote. iMediaEthics has asked Murphy and will update with any response.