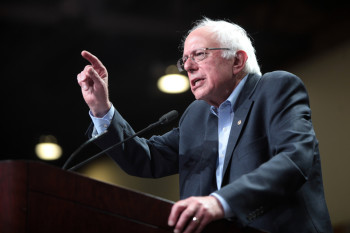 The New York Times made significant changes to an article on Bernie Sanders this week but didn’t disclose them. The Times public editor Margaret Sullivan thinks they should have, and so do we.

“Given the level of revision, transparency with the readers required that they be given some kind of heads-up, and even an explanation,” Sullivan said, noting the article changed from something “almost glowing to somewhat disparaging.” Rolling Stone‘s Matt Taibbi characterized the changes as the Times having “sandbagged” Sen. Sanders.

Dean Baquet, the executive editor of the Times, told the Washington Post’s Erik Wemple, “We thought that the story needed to be infused with the additional element of the campaign, which is the context for examining Senator Sanders’ record. So we added that his challenge now was to see if he could in effect, scale up some of the causes he has pushed with limited success.”

Sullivan said that three Times editors didn’t think the newspaper needed to add an editor’s note or disclosure for readers about the significant changes that were made to the article. “Fair enough. But in this case, I don’t agree,” she wrote. “The changes in this story were so substantive that a reader who saw the piece when it first went up might come away with a very different sense of Mr. Sanders’ legislative accomplishments than one who saw it hours later.”

In an update to her piece, Sullivan noted that the article in question “Was not a breaking news story, but rather a look back at his legislative record.” This suggests the Times had plenty of time to make all the necessary revisions before publication instead of having to make relevant changes as news happens, like in a breaking story.

“Why didn’t senior editors vet the story and make all the editing changes before it went online?” Sullivan asked. iMediaEthics has asked the Times this and will update with any response.  Baquet pointed again to context in an e-mail with the Post‘s Wemple. “It was a very good story, but it needed some context. That got added,” he is quoted as saying.

iMediaEthics has written to the Sanders campaign to ask for comment on the changes to the New York Times‘ article.