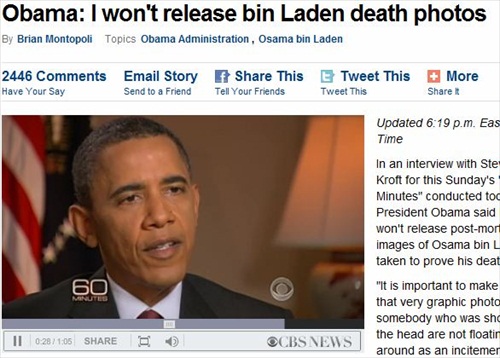 Barack Obama said he won’t release pictures of Osama bin Laden’s bullet-riddled corpse, CBS News reported.  Obama cited several reasons for not releasing the photos, including the photos’ graphic nature, the chance the photos would be “an incitement to additional violence” or propaganda, and the potential national security risk.

The president’s decision includes “all visual evidence” of the death, according to CBS News. “We don’t trot out this stuff as trophies,” Obama went on,

Acknowledging that some will say that the U.S. didn’t kill bin Laden, Obama stated a photograph won’t “make any difference.”  According to CBS News, the photographs are graphic and Obama “saw no other compelling reason to release them.”

According to CBS News, Defense Secretary Robert Gates and Secretary of State Hillary Clinton reportedly “discussed the issue” and backed the decision.

Just one day after Obama’s announcement, CIA director Leon Panetta stated that “The government obviously has been talking about how best to do this, but I don’t think there was any question that ultimately a photograph would be presented to the public,” TIME reported.

The decision to not release any photo evidence of bin Laden’s death has been criticized, but one Michigan congressman defended keeping the photo from the public.

“Imagine how the American people would react if al Qaeda killed one of our troops or military leaders, and put photos of the body on the Internet,” Michigan representative Mike Rogers commented to The New York Times.  “Osama bin Laden is not a trophy. He is dead, and let’s now focus on continuing the fight until al Qaeda has been eliminated.”

However, Gawker reported that American University law professor Daniel Metcalfe claimed a Freedom of Information Act lawsuit may reveal the photos. Metcalfe is also “the former chief of the Department of Justice’s Office of Information and Privacy.”

Meanwhile, Reuters bought photographs from an unnamed “Pakistani security official who entered the compound” where bin Laden was killed “about an hour” after the attack.  The images (Warning: some graphic) show “two men dressed in traditional Pakistani garb and one in a t-shirt, with blood streaming from their ears, noses and mouths.”

Reuters disclosed that it paid for the photos (but didn’t say how much was paid) and that  “none o f the men looked like bin Laden.”  Timestamps on the photos start at 2:30 A.M. May 2. Reuters stated that it “is confident of the authenticity” of the photos since the photos are in sequence, have the same pixel-size, and have corresponding meta-data.

The Guardian noted that the White House hasn’t “sanctioned” Reuters’ publishing those photos.

The Society of Professional Journalists’ ethics chairman, Kevin Z. Smith, compiled a list of questions news outlets should ask before publishing any photos.  Smith blogged about the debate on whether to publish any bin Laden death photos here and noted that news outlets shouldn’t publish a photo just because other news outlets are.

“Whatever the decision, it should be based on solid principles, values and rationale,” Smith commented.

DePauw University professor Bob Steele commented that journalists “think about verification and accountability” with any photos of bin Laden’s death, adding that the photos may fill in some details of what happened at the Pakistan compound.

“We are hearing specifics that he was shot in the head and that is how he died. There is an argument by some that he was assassinated as opposed to killed in a firefight. A photo adds one more piece to a large puzzle in helping us figure out what happened. Then there is the journalistic role of accountability. No matter what one believes about the right or wrong of what took place, the administration, the CIA and the military should be accountable for what happened.”

“Absent seeing the photograph we don’t have the opportunity to look at it and say, ‘This does not make sense.’ “

The Times Herald-Record reported that Columbia University professor of professional practice in media and society, Richard Wald, commented that the decision to publish any death photos “will be more a matter of taste than ethics.”

The Poynter Institute’s Al Tompkins reported advice from ethicists about “how to handle photos” of bin Laden, should the U.S. provide them.  See Tompkins’ full article here.

Tompkins cited fellow Poynter faculty member Kelly McBride’s explanation for the newsworthiness of the graphic photos as being a way to debunk any “conspiracy theories.”  McBride advised that newsrooms weigh the various ways to publish any footage, such as the use of black and white images or online-only.

Tompkins noted that NBC News’ current policy calls for “top executives” to approve any images or videos published by the network.  “While the images may be newsworthy, there are always questions of the public’s tolerance for such images and of whether the photos and videos are authentic,” NBC News Executive Producer for Standards David McCormick explained, according to Tompkins.

University of Wisconsin-Milwaukee media ethics professor David Allen commented to Milwaukee NBC-affiliate WTMJ that editors should consider placement of the photo in case  “a child will see” the image.