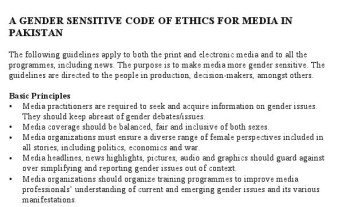 See above a screenshot of the first part of the new code on gender-sensitive reporting. A copy of the code was provided to iMediaEthics by White Ribbon Campaign Pakistan. (Credit: WRCP, screenshot)

In January, advocacy group White Ribbon Campaign Pakistan, a group that focuses on “involving and sensitizing the media” and campaigning “to end violence against women,” announced its plans to create a “gender-sensitive code of ethics,” as we wrote at the time.

The campaign organized a January “Gender Sensitive Reporting” conference and held a study of 280 Pakistani journalists focused on reporting on women.  The study found that media coverage of women often centers on crimes involving or affecting women, as we have written.

The White Ribbon Campaign released its gender-sensitive code of ethics March 8, on International Women’s Day, at a conference the group co-organized with Women Empowerment Group, a “non-profit, non-governmental organization aiming to strengthen the process of socio-economic development and empowerment of the disadvantaged sections of the society.” The code was “developed in consultation with over 190 journalists across Pakistan,” Whtie Ribbon Campaign Pakistan’s county director Aftab told iMediaEthics last month.

Aftab told iMediaEthics that at the March 8 conference, “Over one hundred journalists including media houses signed the code including Deputy Managing Director of Nawa-e-Waqt Group and Chairman Ibrat Group of Newspapers.”  More than 250 people attended the conference, according to Aftab.

Aftab sent iMediaEthics a copy of the code, which is designated for print and electronic media.  The code calls for media outlets to “seek and acquire information on gender issues,” and be “balanced, fair and inclusive of both sexes” in reporting, including in sourcing stories.

Journalists are advised to avoid “oversimplifying and reporting gender issues out of context” and to hold “training programs” to educate on gender issues.

Journalists are also advised to “give equal importance to the achievements of both men and women” and to show men and women “in a wide range of roles, both traditional and non-traditional, in paid work, social, family and leisure activities.”

The code calls on “media professionals” to carefully use language, to respect both genders, and to avoid any “stories provoking hatred based on particular gender.”

Last month, Aftab told us that the code is the first of its kind.  He told iMediaEthics: “Previously there has been no formal or written code of conduct for gender-sensitive reporting.”

Aftab told iMediaEthics that White Ribbon Campaign Pakistan, which he said has “over 4000 volunteers,” plans to publish the code on its website.

Likewise, Pakistan newspaper The Nation’s managing editor Rameeza Majid Nizami said at the conference that “communication can be one of the most powerful tools in the fight to end violence against women,” The Nation reported.

We have written to Women’s Empowerment Group and will update with any response.