Pakistani Journalists Told to be Responsible 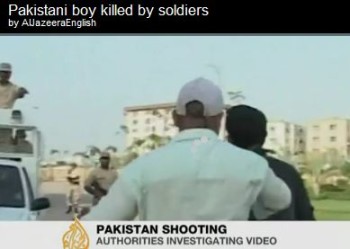 Publication of the above video prompted calls for media to report sensitively and responsibly. (Credit: guardian/al jazeera, screenshot)

At a Pakistani seminar, journalists were advised to be responsible in reporting on “the deteriorating security situation,” English-language Pakistani newspaper the Nation reported.

Pakistani Senator SM Zafar, who “presided over the seminar,” also reportedly commented that the media shouldn’t over-play “footage of the Karachi incident,” which shows an unarmed “youth” being killed by Rangers.

As a result of the “videotaped killing,” two Pakistani “senior officials…have been removed from their posts,” according to Voice of America. The video tape was broadcast on a Pakistani TV station and showed the 22-year-old man “bleeding to death and screaming.”

Also, the media was called on to “adopt” a code of ethics. The seminary was hosted by in part by Pakistan’s Hameed Nizami Press Institute.

Pakistani Journalists Told to be Responsible