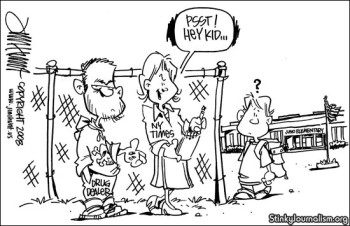 Cartoon depicts a NY Times sanctioned reporting method--contacting teens on Facebook-- that new guidelines only require "prior consultation" with editors.

He continued, “Although the reporter, Jodi Kantor, said in a message to the teenagers that she was ‘ just seeking some fellow parents who can talk about what Mrs. McCain is like,’ people I heard from thought it was wrong. ‘Disgusting,’ said Gwilym McGrew of Woodland Hills, Calif. ‘Will she be contacting my 12-year-old soon, too?’ ” Indeed. 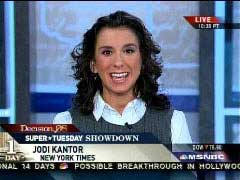 Are journalists a new kind of Internet predator? Must parents warn teens not to speak to journalists? Image of Jodi Kantor, NY Times reporter, who improperly sought teens on Facebook.

Kantor claimed she was not trolling for teens, just their parents. But the count tells the truth. She contacted only one school versus “eight or nine” teens. Her asymmetrical actions state loud and clear that Kantor was seeking teens to find out “what she [McCain] is like as a mother?”

Kantor’s negative profile on Ms. McCain would naturally lead one to question, post hoc, if her upbeat message to the teenagers, was pure deception from the start. She wrote:

Kantor was not only trying to use teenagers to get information on Ms. McCain, a fair target, but what Hoyt neglects to mention in his column is her triple-threat to Times credibility: Kantor was improperly leveraging the power of the Times name; to improperly contact and use teens; to improperly seek personal information about McCain’s minor daughter. Kantor solicited teens in her email : “I’m trying to figure out what school her 16 year old daughter Bridget attends.”

Hoyt provides readers with a shopping list of excuses for Kantor: “Kantor was trying to find creative ways around the public relations shield that protects a political wife like McCain, an intensely private person. Kantor did not misrepresent who she was or the story she was working on. She asked for leads to adults and did not ask the teenagers directly to say things, good or bad, about McCain. By sending a Facebook message, she gave the students the opportunity to consult with their parents or ignore her; in fact, none of the messages produced useful information.”

I think it is disingenuous for Hoyt to state that Kantor gave the students only two choices– “to consult with their parents or ignore her” –when nowhere in her message does she instruct the teens to “do not write to me yourselves” or “I only want to hear from your parents or adults.” She asked for the teen’s “advice” in her opening sentence–not to speak to their parents. Later, Kantor asked the teens a direct question while guessing which school the daughter attends (emphasis mine) : “Do you know if that’s right?” How is this an email soliciting their parents?

Her email is cleverly written, and leaves a third, most obvious option. There is no doubt the barnyard manure door is left wide open  for the teens to contact her themselves when she added (emphasis mine): “Also, If you know anyone else who I should talk to– basically anyone who has encountered Mrs. McCain and might be able to share impressions– that would be great.”

“Anyone” includes the teens, of course, and places no restriction to her inquiry for only adults to respond.

Hoyt reassures readers that “Kantor told me that she would never have quoted the teenagers themselves.” Is it open seaon for Times reporters to seek out teens as anonymous or unnamed sources speaking on “background”?

So what did the Times editors do to Kantor? A public reprimand, perhaps? Not a chance.

Hoyt said Times editors “wished that Kantor had consulted with them before contacting the teens.” He also said Craig Whitney, the standards editor, “drafted a new guideline that says approaching minors to ask about private lives ‘is a particularly sensitive area’ and ‘may not be advisable.’ It requires prior consultation with him.”

The facts speak for themselves. Kantor’s research method? She called one school (where she was destined to speak only to adults); versus, sending “eight or nine” emails to teenagers (where she insinuated herself among teenagers to gain information). There are no excuses in my view about this ethical breach, despite Hoyt’s soft-soaping the debacle. Kantor was bottom-fishing and operated more like an Internet predator than an esteemed Times investigative reporter.

Must parents now add to their list of instructions to children: “Do not take candy from strangers” and “Do not talk to journalists who approach you on the Internet” ?